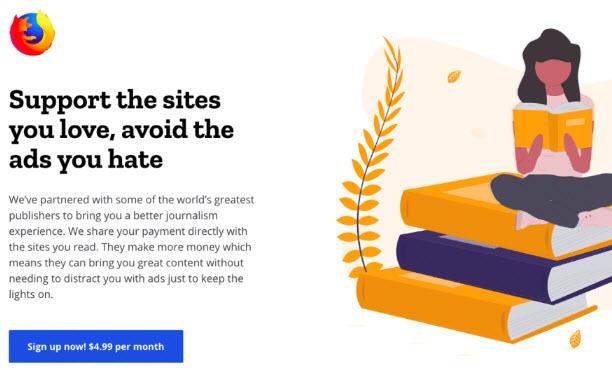 This is the latest offering supposedly designed to help publishers monetize their content. But instead of a standalone app, a la Apple News+, this service offers ad-free access to users’ favorite premium websites for a $4.99-per-month upfront fee.

In marketing (above) guaranteed to irritate the advertising community, Mozilla is urging readers to “Support the sites you love, avoid the ads you hate.”

The service syncs across devices, so that users can switch to another device to finish reading an article,

Publishers participating at this stage include The Atlantic, USA Today, BuzzFeed, Slate and Gizmodo Media.

Apple developed Apple News+ using assets from Texture, the unsuccessful digital magazine subscription service that it acquired in March 2018 from a consortium of major magazine publishers.

But the app, launched this March, has failed to generate anywhere near the revenue that publishers expected.

Apple told publishers that Apple News+, in its first year, would earn them 10 times what they’d made from Texture over several years, but has fallen far short of that promise, according to Business Insider. The app has also had technical problems.

Apple has said that it has “hundreds” of employees working to improve the app’s user experience, but publishers remain skeptical.