On PBS, The Case Of The World's Handsomest Clergymen 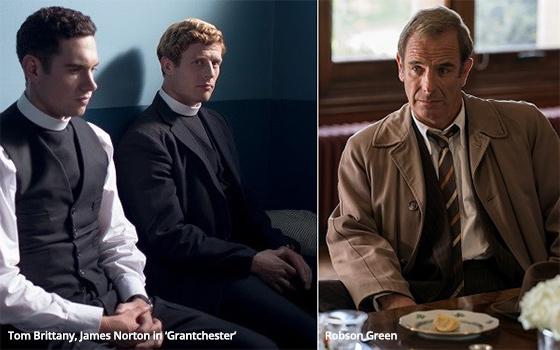 The small town as an oversized hotbed of violence recurs again and again in mystery fiction, and on television.

Someone even did a little math to determine that quaint little Cabot Cove, the Maine village that was the setting for “Murder, She Wrote” for 12 seasons, had a murder rate that was 60% higher than Honduras, the Central American nation considered to be the most murderous in the world. This information comes via MeTV.com.

Whether the fictional English hamlet of Grantchester will ever overtake Cabot Cove as TV’s small-town murder capital of the world awaits a similar analysis.

Suffice it to say that in the PBS “Masterpiece” series called “Grantchester,” this English town has enough homicides to employ what appears to be a robust police force -- assisted by a swashbuckling local clergyman, Sidney Chambers, otherwise known as the handsomest vicar-sleuth in the history of television.

When watching this show -- which starts its fourth season on American television this coming Sunday night -- you can’t help but realize that you have never quite seen a vicar like this one on an English TV show before.

Sidney is played by James Norton, who has agreed to appear in at least part of this fourth season of the show to help in a transition that will bring a new young vicar to Grantchester, one Will Davenport, played by Tom Brittney. In the photos above, the new vicar is on the left, with Sidney (Norton).

The photo at right shows Robson Green as Detective Inspector Geordie Keating, the man who has ostensibly been partnered with Sidney in multiple murder investigations and who will now take up a similar partnership with this Will Davenport.

This is according to various press announcements from “Masterpiece” over the last few months, although the anticipated switch of Davenport in place of Chambers does not take place in this coming weekend’s two-hour season premiere of “Grantchester.”

However, it is accurate to say the curtain is raised and the scene is set in the season-opener for this changeover -- although this is all the TV Blog feels comfortable with divulging.

As the new season begins, the time frame is late spring 1956 and Little Richard is singing “Long Tall Sally” as an action sequence opens the show. Eventually, another sign of the times makes itself known in the hamlet of Grantchester -- the American civil rights movement.

When watching this two-hour season premiere this week, compliments of PBS, the TV Blog wondered whether “Grantchester” was really the best milieu in which to examine the civil rights crusades of the 1950s.

Where Great Britain is concerned, the TV Blog has no knowledge or awareness of whether the English were undergoing the same societal upheavals as the Americans in this time frame.

Thus, giving “Grantchester” a season-opener in which race relations and racial strife form the underpinnings for at least one of the episode's murder mysteries plays like an effort on the part of the show's writers and producers to write a script that they may have felt would be relevant to today's audiences, who are nothing if not obsessed with race relations.

As the episode proceeds, however, its race story evolves into the basis for Sidney entertaining the idea of leaving Grantchester in order to pursue more meaningful work elsewhere.

The second hour of this two-hour premiere concerns itself less with race relations than with small-town corruption as Geordie and Sidney uncover a prostitution ring. Grantchester does have its secrets.

The fourth season of “Grantchester” starts Sunday (June 14) at 9 p.m. Eastern on PBS.

england, television
1 comment about "On PBS, The Case Of The World's Handsomest Clergymen".
Check to receive email when comments are posted.
Next story loading