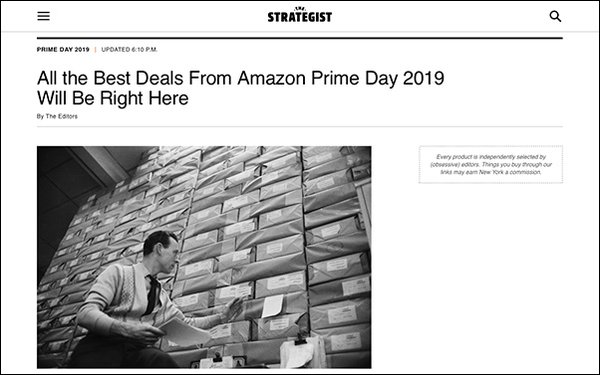 New York magazine’s shopping-focused site The Strategist is doubling-down on coverage around Amazon Prime Day, which this year will offer 48 hours of deals to Prime members, starting Monday.

“The Strategist’s users love a good deal, and many of them are Prime members. Thus, we've seen from the past two years of Prime Days, there is significant interest to shop during this Amazon shopping event,” Camilla Cho, general manager of ecommerce at New York Media, told Publishers Daily.

For the first time, The Strategist will offer exclusive Prime Day deals on its site. Readers will get early access to 40% off an Orolay winter coat the site covered last year that went viral.  (It has nearly 7,000 reviews on Amazon).

Amazon provides The Strategist with a discount code it will use in an article on Sunday about the deal. It will also have a deal on two legging and bra sets from Amazon Fashion brand Core 10.

Leading up to Prime Day, the nymag.com home page will promote Strategist newsletter sign-ups as well, with the latest deals sent to readers’ inboxes.

The Strategist aims to get more users to sign up for its newsletters this year and follow it on social media, especially on Twitter, where the team will be live-tweeting deals and bringing attention to time-sensitive ones, Cho said.

The Strategist has also started its coverage earlier this year in the lead-up to Prime Day. With a bigger staff in 2019, it has greater resources to devote to finding more deals to highlight across a wider range of categories, according to Strategist editor Alexis Swerdloff.

The Strategistwill focus coverage on seven categories, including Fashion, Beauty, Kitchen and Appliances, Amazon Echo and other Amazon devices, TVs, Home Decor and Furniture, and Kids and Babies.

The site will also round up products it has previously covered that are on sale for Prime Day.

“We’ll be doubling down on the pieces that have proven popular in the past," Swerdloff said. She means items that "cut through the noise of all the Prime Day content, which often feels thrown together and not particularly personal or thought through."

Each of its writers and editors will share one thing they plan to buy on Amazon Prime Day and why. Last year, The Strategist’s staff picked products like a Dyson vacuum, a hypoallergenic pillow and a bidet.

Amazon Prime Day coverage from The Strategist will also appear across New York's other standalone verticals, which include Vulture, the Cut, Grub Street and Intelligencer, whererelevant.

“We provide the curation and the research to show our users what deals are worth taking advantage of,” Cho said.