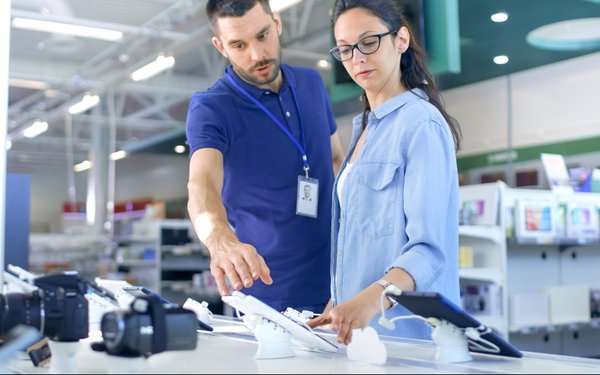 Consumer technology sales are on the rise.

Pushed along by artificial intelligence-enabled devices, in-vehicle technology and streaming services, the U.S. consumer tech industry will reach $401 billion in retail revenue this year, according to a new study by the Consumer Technology Association (CTA).

Revenue is being driven by a wide range of technologies, from smart homes to streaming video.

Sales of smart speakers, most notably the Amazon Echo and Google Home lines, should reach 35 million units, an increase of 1% from last year and reaching $3 billion in revenue.

The home robot category, including devices for vacuuming, lawn mowing and floor cleaning, is expected to grow to sales of 4 million devices, a 12% increase.

Wireless earbuds, such as Apple Air Pods and Beats by Dre Powerbeats Pro, are projected to sell nearly 16 million units, a 45% increase, and reach about $2 billion in revenue.

Smartwatches, the hottest of the wearables category, are projected to reach sales of $5.4 billion with 20 million watches selling, a 7% increase from a year ago.

The big revenue is with smartphones, accounting for $77.5 billion with 166 million units selling. CTA expects 5G-enabled devices will each 2 million units sold this year.

Sales of televisions, still the centerpiece technology in many homes, are projected at 39 million sets for revenue of $21.4 billion, a decrease of 9%.

The largest revenue increase of any tech category is factory-installed in-vehicle technology, increasing $1 billion from a year ago to reach $17.6 billion this year.