The 'Office' Mystique: Making Sense of A Sitcom Phenomenon 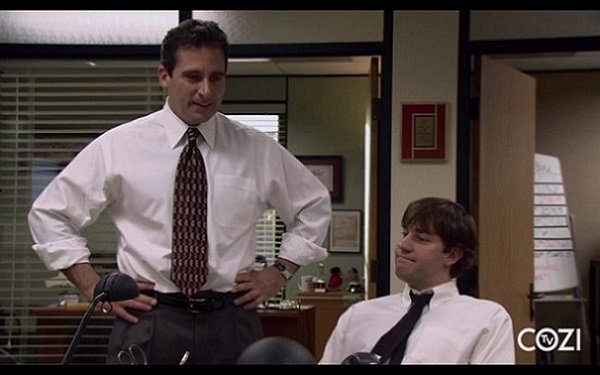 Suddenly, “The Office” looks like the hottest property in television.

In story after story that appeared on Thursday covering the planned launch next April of NBCUniversal's long-awaited streaming service (as yet unnamed), the role that reruns of “The Office” will play as a premiere attraction was emphasized again and again.

It makes you wonder: Just how long can a sitcom remain popular, and more to the point, continue to generate revenue for its owners? The answer: Quite a long time. And quite a lot of money too.

“The Office,” which first aired from March 2005 to May 2013 (nine seasons), was produced by NBCU’s own studios. The company has been profiting from it for years in rerun syndication, under which it has been seen at various times on scores of local stations, and on cable channels such as TBS.

It is currently on Comedy Central and also on Cozi TV, a diginet developed under the auspices of the NBC Owned Stations division. The photo above, of Steve Carell and John Krasinski on the show, is a screen grab from Cozi TV’s Web site.

On the subject of sitcoms exhibiting extraordinary vitality long after they first aired, many people can name a very obvious group of titles that include “Seinfeld,” “Friends,” “Two and a Half Men,” “The Big Bang Theory” and possibly a few others (including “The Office”).

The paradox of these shows is that they are seen so frequently on so many platforms (not only local stations and basic cable, but all over the subscription streaming services too) that you would think this overexposure would have led to audiences tiring of them a long time ago.

But instead, the opposite seems to be the case. Not only do audiences continue to tune in to see the same episodes again and again, but in some cases, these shows are attracting new audiences of younger people who were not yet born, or at least not old enough, to discover them when they first aired.

“Friends” is a case in point. Teens all over New York City, who were not yet born when the show was on, can be seen wearing “Friends” t-shirts. And many are watching the show too, primarily (one assumes) on Netflix.

“The Office” has emerged as such a special show in recent years that NBCU is positioning it as the “tentpole” attraction in its new streaming service, which will be free and ad-supported.

Much was made in recent weeks (and again in this week's stories) of NBCU's decision not to renew “The Office” on Netflix, choosing instead to bring the show back in-house (so to speak). It has reportedly been one of the top attractions on Netflix (along with “Friends,” which is owned by Warner Television), which is now seen as a competitor for NBCU’s new streamer.

So what makes “The Office” so special? Well, a couple of things come to mind. One of them is its subject matter -- the group of people who work cheek by jowl in a typical cubicle office configuration for a small company in a small city (the fictional Dunder-Mifflin Co., a paper company, in Scranton, Pennsylvania).

The workers in this office range from young people evidently taking up their first jobs in the real world after college to older, middle-aged staffers who have been there a while. As such, there are ample archetypes here with whom viewers of various ages can identify.

In addition, the show was uproariously funny, and the cast emerges today as one of the best assembled for any TV sitcom in the last 10-15 years. The show made Steve Carell a star. John Krasinski was a virtual unknown who is also an A-lister today. Other cast members included Rainn Wilson, B.J. Novak, Jenna Fischer, Mindy Kaling, Craig Robinson, Ellie Kemper and Ed Helms -- all of whom have gone on to movies and other TV shows.

As mentioned in another recent TV Blog about Netflix and the rival media companies launching streaming services to compete with it, “The Office” represents the kind of intellectual property that far exceeds in value any originally produced series that Netflix has developed to date.

Companies such as Warner, NBCU, CBS and Disney have a tonnage of this kind of content. And now it has become apparent that for a select group of older TV shows, overexposure is not an issue. This means that when it comes to a show such as “The Office,” NBCU can use it all it wants on its new streaming service, while at the same time continuing to sell it in syndication and air it on Cozi.

For NBCU and the other companies, the shows it developed, paid for, promoted, aired and in many cases, produced (and therefore still owns) are just gifts that keep on giving.