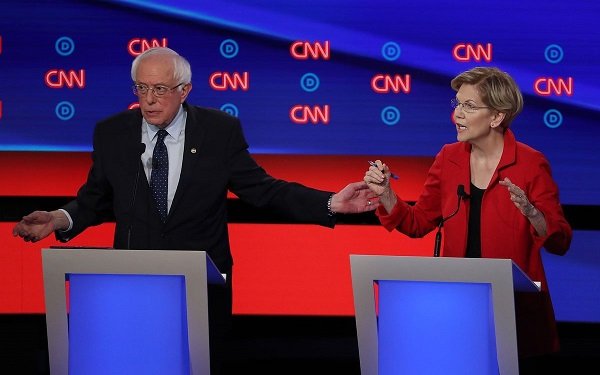 The Democrats put on a better show on night one of this week’s debates on CNN than they did late last month on NBC.

The 10 participants in Tuesday night’s debate in Detroit differed markedly in their approaches to key issues such as universal healthcare, immigration, the use of nuclear weapons and climate change. But they somehow managed to come across as more unified than they did in the first round of debates in June.

This may have been due, at least in part, to a better display of manners. Tuesday night’s debate on CNN, which ran from 8 p.m. to 10:45 p.m. Eastern, had almost none of the rude, grasping interruptions that characterized much of the NBC News debates four weeks ago in Miami.

On the other hand, the principal offender and serial disrupter of others in those debates was New York Sen. Kirsten Gillibrand. She was not among the group of 10 on Tuesday night. She’ll be seen tonight (Wednesday) on night two of these Democratic debates on CNN.

Of the 10 who participated on Tuesday night, most came across well. The exceptions included former Texas Rep. Beto O’Rourke, whose candidacy seemed red-hot just a few months ago but now appears to be cratering. He spoke in vague generalities and platitudes Tuesday night and, as a result, produced no memorable moments.

Former Colorado Gov. John Hickenlooper seemed unsure of himself at times. And newcomer Steve Bullock, governor of Montana, started out strongly, but seemed to flag in his energy and concentration as the long debate wore on. He was a better debater than the man he replaced, however: California Rep. Eric Swalwell, who dropped out of the race after last month’s debate.

Pundits and analysts predicted it would be a battle of moderates versus the two less-than-moderate frontrunners who were positioned center stage at Detroit’s Fox Theatre, Sens. Bernie Sanders and Elizabeth Warren.

The predictions turned out to be true. Two candidates -- Ohio Rep. Tim Ryan and former Maryland Rep. John Delaney -- scored points when they asserted repeatedly that the healthcare and health insurance overhauls being proposed by Sens. Sanders and Warren won’t fly with millions of voters who are satisfied with the health insurance they currently have.

Ryan was notable for coming up with perhaps the evening’s best slogan, one worthy of the advertising business: “Not left or right -- new and better!” he said more than once during the debate, referring to his own ideas.

Ryan and Delaney also effectively attacked the frontrunners on the high costs of other ideas they support such as forgiving college debts and free healthcare for undocumented immigrants. The moderates hammered away at a basic theme, their belief that the Democrats cannot win the White House in a campaign against Donald Trump unless the party moderates some of its ideas and proposals.

For their part, Sanders and Warren gave as good they got -- assertively turning back the arguments of the moderates. Even a viewer who disagrees with them on just about everything could be impressed by their passion, wit and intelligence.

Much harder to peg in the aftermath of Tuesday’s debate was the mayor of South Bend, Indiana, Pete Buttigieg. He too spoke in generalities, and came across as less passionate and more subdued than he did four weeks ago. Moreover, in both his opening and closing statements, he waxed so pessimistically about issues like climate change and gun violence that he came across as a voice of doom.

By contrast, Minnesota Sen. Amy Klobuchar performed strongly, coming across as a calm voice of reason.

At the far left of the stage was the New Age author Marianne Williamson, who used her on-camera opportunities to blast the Democrats. She called for nothing less than a revolution that would presumably end with her residing in the White House.

Perhaps with tongues in cheek, a number of commentators on the right declared her the winner of Tuesday night’s debate.