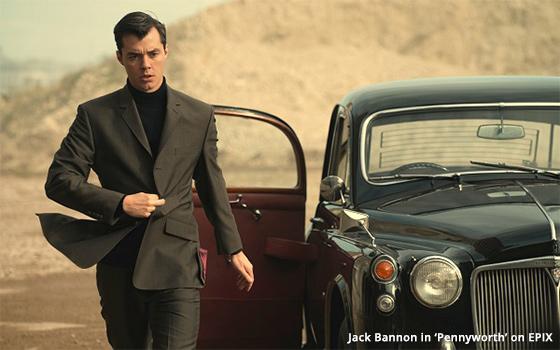 The television beat is like a box of chocolates. You never know what you're gonna get!

This Forrest Gumpian quotation is a reaction to the constant variety of television to which a TV columnist is exposed during any given week or on any given day.

Take this new dramatic series called “Pennyworth,” which is coming to Epix this coming Sunday night. Compare and contrast this series with the new “Veronica Mars,” which started last Friday on Hulu, and which the TV Blog reviewed yesterday.

I watched an episode of “Veronica Mars” with high hopes, and they were dashed within the first few minutes (and stayed that way throughout).

I watched an episode of “Pennyworth” a day later with nearly no foreknowledge of the show, and therefore no expectations at all -- either positive or negative.

Where watching “Veronica Mars” quickly became a dreary chore that seemed to drag on for hours (though the episode I watched was only 48 minutes long), watching the premiere episode of “Pennyworth” made me wish it was longer -- even at 71 minutes in length.

Who is Pennyworth? He is a young man in London in the early 1960s who served in a special forces unit of the British army for 10 years and is now trying to find his way in the civilian world.

In the years to come, this Pennyworth -- first name Alfred -- will become butler and personal valet to Bruce Wayne, known the world over as the alter ego of Batman.

But that comes later. And for all we know, that future is not even within the scope of “Pennyworth,” although Alfred does become entwined in the life of an American named Wayne in the “Pennyworth” premiere. This Wayne -- first name Thomas -- will eventually become the father of Bruce Wayne.

The young Pennyworth is no butler, but he is descended from one. His father is a prideful traditionalist in the service trade, and wishes his son would embark upon the same honorable career track.

But Alfred has other ideas. Currently working as a bouncer/doorman at a London nightclub, Alfred is trying to jumpstart his own “security” business. A chance encounter with this man named Wayne suddenly catapults Alfred into the midst of an insidious plot to overthrow the British government.

And the rest is history -- or, more to the point, pre-history, for this is the origin story of a beloved character from the “Batman” universe who a generation raised in the 1960s came to know as an impeccably mannered elderly English gentleman played by the great Alan Napier opposite Adam West’s Batman (and Bruce Wayne) in TV's original “Batman” series.

With that great character firmly in mind, it is no great stretch at all to imagine the young Alfred of “Pennyworth,” who is played with great self-confidence by an actor named Jack Bannon.

He is a charismatic lead actor who creates a very charismatic title character. Fortunately for the rest of us, all of the other elements that make up this show are equal to the high standard set by the character and the man who plays him.

“Pennyworth” is what a modern-day TV series should be -- hugely attractive, cinematic, swashbuckling, entertaining, packed with action and surprising characters in eye-catching settings. It is a great show that will probably wind up the year next December on the TV Blog’s annual list of the year's best shows.