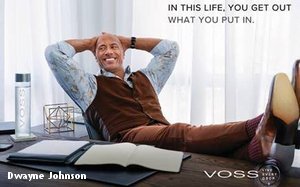 The “Live Every Drop” campaign aligns with the company’s efforts to reposition Voss as “a premium water suitable for everyday consumption in addition to being a go-to and trusted label for special occasions,” according to a news release.

Last month, Johnson (aka The Rock) took a financial stake in the Norway-based Voss. In an Instagram post, he said Voss water “has been a staple in my life for over a decade.”

“Live Every Drop,” which provides behind-the-scenes snippets of Johnson’s daily activities, will roll out on billboards in major U.S. markets along with digital and social media. The campaign was produced by Johnson’s own Seven Bucks Creative agency and supported by iFuel.

Asked why Voss chose to align itself with Johnson, Vice-Chairman John Shulman tells Marketing Daily, “His organic loyalty to the brand has been a point of pride for us for a while, so formalizing the already existing relationship was a natural next step. Given the shifts in the bottled water category, and the maturity of Voss in many markets, the timing was finally right for the brand to explore a partnership of this magnitude, and we knew Dwayne would be the best person to help bring our vision to life.”

Johnson is the latest celebrity to get behind a water brand. Actress Gwyneth Paltrow has been promoting Flow Alkaline Spring Water — also the official water of Paltrow’s lifestyle brand Goop. And Flow recently created a new partnership with singer Shawn Mendes. Mendes and his manager, Andrew Gertler, also made an investment in Flow.

Last month, the Ontario, Canada-based Flow opened a 55,000-square-foot manufacturing facility in Augusta County, Virginia -- its first in the United States, as reported by BevNET. The site was chosen because it’s near a naturally alkaline water source similar to that of the company’s Canada roots, is a 15-minute drive from an Amazon distribution center and is located within one trucking day of 65% of the U.S. population.

Between regular and sparkling water, the market shows no signs of slowing down. According to the International Bottled Water Association, through 2018 bottled water was the most popular beverage in the U.S. for three consecutive years.

In a recent report, the organization noted that, on average, “each American consumed 42.3 gallons of bottled water in 2018” as the intake of carbonated soft drinks dropped to about 37 gallons, the 14th consecutive year of decline.

Water infused with CBD -- an element of hemp and cannabis -- is seemingly flowing everywhere even in the absence of federal government regulations. In the coming weeks, the Food and Drug Administration is expected to release guidelines for CBD ingestion, which should help to ease consumer and marketer confusion and clear a path for even more brand entries.