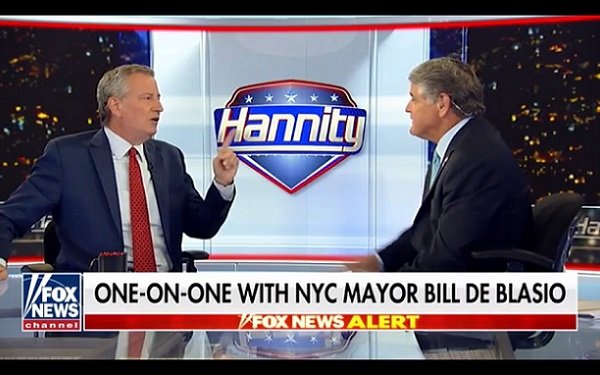 But a robust audience was not the only benefit for “Hannity.” The high-spirited, one-hour interview with the New York City mayor demonstrated that liberal Democrats are welcome at Fox News, even on the network's highest-rated show hosted by the most conservative of all its prime-time stars.

The appearance was a boon to the mayor too, because it showed he could hold his own in an interview situation in which it was crystal clear that he and his interviewer agreed on nothing.

And viewers benefited too. Here was a chance to see two people who approach every single issue being debated in this presidential campaign season from completely opposite poles in the political spectrum, and they remained polite and civil. Needless to say, this is virtually unheard of in this day and age.

This is not to say the hour was subdued or dull. On the contrary, each of these participants -- de Blasio (on the far left in the photo above) and Hannity (on the far right) -- gave as good as they got.

They were feisty, combative, assertive and argumentative.

There was no clear winner, although viewers partial to either side could understandably favor the man who best represented their own point of view and feel that their man bested the other. One thing that likely came as a surprise to viewers who were predisposed to dislike either of them is that they both came across as likable, each in his own way.

Above all, the hour was hugely entertaining. For once, opposing sides got an airing on one of our most partisan prime-time talk shows, and nobody got hurt. Imagine that.

In the aftermath, the trade press reported that “Hannity” on that evening drew 3.3 million viewers -- a stellar night for Fox News, and a high number for basic cable generally. That night’s “Hannity” audience was 5% higher than the show has been drawing on average so far this year, according to The Hollywood Reporter.

While civility was largely maintained within the one-hour show, comments that came afterward from the de Blasio camp were not as amicable.

The Hollywood Reporter apparently asked a de Blasio spokesperson whether the mayor planned to return to Fox News any time soon. “The mayor is running for president to stand up for all working people, regardless of what cable news they watch,” THR quoted the spokesperson as saying in an email. “We are willing to go back to talk to working people who have been lied to by Fox News for years.”

De Blasio himself also blasted Fox News on the day after the interview, according to THR. “I think Fox News and News Corp. have done untold damage for the last few decades in this country,” THR quoted him as saying on a radio show.

“I think they’ve been an incredibly divisive force,” de Blasio said, “but millions and millions of people turn there for news, including a lot of working people, a lot of labor union members, a lot of people who we should not for a moment ignore or give up on, but should have that discussion and bring it to them and challenge the orthodoxy of Fox hosts.”

The mayor’s statement could be interpreted as meaning that he actually thinks he can convert  members of Sean Hannity's audience to support him, one of the most progressive of all of the progressive Democrats now battling to stay in the race in advance of the next round of Democratic debates next month.