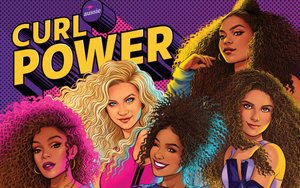 The campaign — which features five new curly-haired female comic book characters created for the occasion — will be a major component of P&G’s presence this weekend at Beautycon in Los Angeles. With panel discussions and exhibits, Beautycon aims to bring beauty and wellness brands together with fans and consumers.

The gist of the new Aussie campaign is a reaction against how P&G thinks females have been regarded by the “male-dominated and male-celebrated” comic book industry since the 1930s, according to a news release: “She was the damsel in distress; the seductress; the love object; the buxom babe with long, flowing hair and curves for days: all waiting for a hero.”

Hence the term Sheroes and the concept that curly hair is underrated and that “beauty ideals” need to be reframed.

“As a mother of a curly girl, I believe that young girls deserve to see positive and powerful depictions of themselves being celebrated by beauty brands, in pop culture and in visual media,” says Lynn Hicks, brand manager for Aussie.

Bartel is best known for her work for Marvel Comics and Image Comics. She co-created the comic “Blackbird” for Image Comics with Sam Humphries and won an Eisner Award for her work as a cover artist in 2019.

“It is fiction,” Bartel says of the campaign and its characters, “but still tangible and finally relatable to girls who have not grown up seeing their beauty and especially not their beautiful, curly hair spotlighted at all, let alone as a super power.”

The personas created for the campaign are named Radiant Star, Dream Defender, Lioness, Wave Warrior and Vibe Queen. Aussie’s Beautycon installation will allow fans to interact with five young women who will represent those personas, among them actress and social media star Daniella Perkins and blogger Leah Allyannah.

The campaign will be promoted via traditional and social media, with creative a collaboration of Bartel and the Saatchi & Saatchi agency, media handled by Carat and publicity managed by DeVries Global.

Aussie products reside within P&G’s Professional division, the brand having been acquired in 2003.