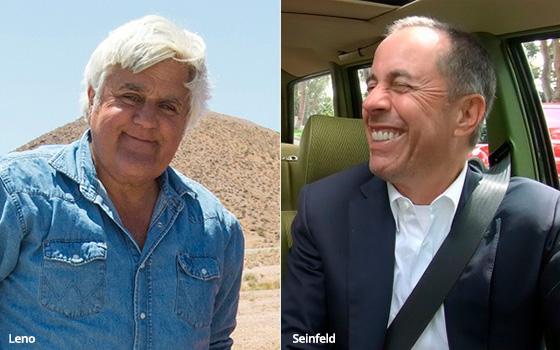 A promotional video seen recently on Netflix features Jerry Seinfeld complaining comedically about the many shows that he says were influenced by his show, “Comedians In Cars Getting Coffee.”

He then lists a number of titles ranging from “Carpool Karaoke” to “Clergy in Cars Getting Coffee.” Some of the titles did not seem real, but Seinfeld insists in the promo that they are all real shows.

But what about his own show? The original comedian in cars was Jay Leno. Might Seinfeld, who is himself a car buff (he collects Porsches), have been influenced by Leno to develop a car show in the first place?

But long before that, “Jay Leno’s Garage” was a series of short-form videos available to watch on NBC.com for a number of years, even while Leno was still host of “The Tonight Show.” He left “Tonight” in 2014.

And as a car enthusiast, collector and hands-on mechanic, Leno is far better known than Seinfeld. His car collection is bigger and much more wide-ranging. Moreover, the cars Seinfeld features on “Comedians In Cars” seem to be loaners from other collectors -- except maybe for the occasional Porsche, which might, in fact, be one of his own.

The inspiration for this blog post came this week when the TV Blog made time to catch up with the current group of “Comedians In Cars” episodes by watching the one that has gotten the most attention -- the one featuring Eddie Murphy. In this show, Murphy and Seinfeld drive around L.A. in a Porsche, although Seinfeld does not say whether it belongs to him.

In the show, Seinfeld and Murphy are seen in the car -- Seinfeld behind the wheel and his guest in the front passenger seat -- talking about comedy. They cover their comedy idols, their work habits and their early years in stand-up (they both trace their very first professional performances to the same week in July 1976 at The Comic Strip on Manhattan’s Upper East Side).

At various times, one or the other utters something that the other apparently thinks is funny because hearty laughter ensues. Sometimes, the laughter seems a little bit too hearty -- forced, you might say. On many episodes of his show, Seinfeld himself seems to have become the world champion of forced laughter (see photo above right).

In the Eddie Murphy episode, the two even make a stop at one of L.A.'s storied comedy clubs, the Improv. Then, seated in this dark empty club in the middle of the day, they reminisce some more.

The fact is, for all intents and purposes, the rundown of the Murphy episode of “Comedians In Cars Getting Coffee” could serve as a description of nearly every other episode of this show.

In fact, one feature common to many of the shows is a point during each of them when Seinfeld and his guest seem to run out of anything to say. Sometimes this results in awkward pauses followed by a return to subjects already covered, such as their early years or comic influences. “Comedians In Cars Getting Bored” could serve as an alternative title of this show.

Meanwhile, each episode of “Jay Leno’s Garage” is a gem. The show is highly educational and hugely entertaining. The show covers a multitude of beautiful, eye-popping vehicles in each one-hour show, all held together by Leno.

The emphasis here is on cars, not comedy -- although Leno gets off various quips here and there out of force of habit. But there is no forced laughter on this show, just Jay having a good time.

Perhaps the biggest difference between these two comedians-in-cars TV shows is that the Leno show is about cars, while the Seinfeld show is about comedy. With so many cars in the world, “Jay Leno’s Garage” is endlessly fascinating. But Seinfeld's repetitious dissection of the “science” of comedy quickly grows tedious.