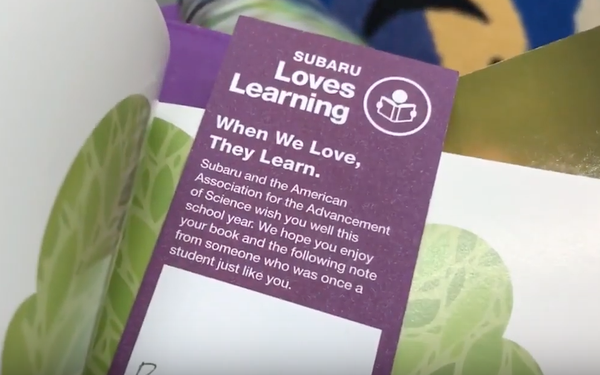 Subaru of America is partnering with the American Association for the Advancement of Science for the Subaru Loves Learning initiative.

Through the initiative, now in its fifth year, and developed in conjunction with the Subaru Love Promise vision, the automaker and its retailers will donate more than 91,000 science books to schools across the country.

Consumers are invited to visit participating Subaru retailers throughout August to have a book donated in their name and to write a personalized note on a bookmark to be placed inside each book. The automaker has created a microsite to offer information about the Subaru Loves Learning initiative.

The donated books are selected from the winners and finalists of the AAAS/Subaru SB&F Prize for Excellence in Science Books.

More than 80% of the fastest-growing jobs in the U.S. are in the fields of science, technology, engineering and mathematics (STEM) and only 36% of high school students are ready for college-level science. With the inclusion of outstanding K-12 science trade books in the classroom, teachers can help bridge the gap.

"A love of learning, rooted in the disciplines of science, engineering and innovation, is a fundamental element of our Subaru Love Promise," states Alan Bethke, senior vice president of marketing at Subaru of America.

Meanwhile, the automaker announced the two-millionth U.S. sale of its Forester SUV. The company's consistent annual sales growth helped Forester achieve the milestone in under a third of the time that it took to reach the one-millionth sale set in June 2013.

Known for its large capacity with a small footprint, the Forester was added to the Subaru line-up in 1997. The first-generation Forester was an alternative for customers who wanted the same performance and versatility as the Outback, but in a smaller vehicle..