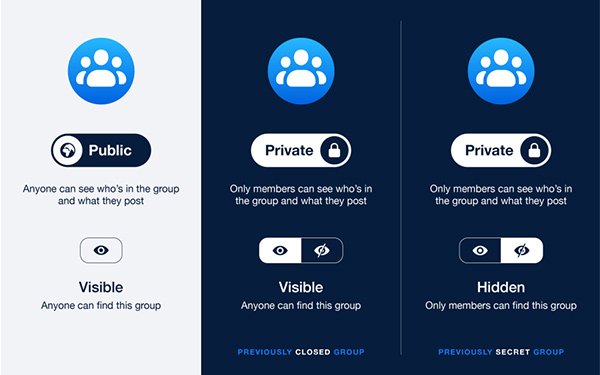 With an eye on simplicity, Facebook just committed to drawing a clearer line between Groups that can be viewed publicly and privately.

“We’re making this change because we’ve heard from people that they want more clarity about the privacy settings for their groups,” according to Jordan Davis, product manager for Facebook Groups.

Davis added his team has heard that most people prefer the terms “public” and “private” to describe the privacy settings of groups to which they belong.

For Facebook, the change is part of a broader push to make users feel more safe and secure on its platforms.

Over the last year, for example, the tech titan has sought the help of privacy experts and advocates in order to better manage users’ personal information.

Apple just recently had to address a similar controversy.

The Federal Trade Commission recently hit Facebook with a $5 billion fine for running afoul of its consumer-privacy rules. In addition, Facebook agreed to submit to new restrictions and a modified corporate structure.

The FTC commissioners who supported the agreement (two commissioners dissented), say it would serve to hold the company accountable for decisions it makes about users’ privacy.

In April, Facebook said it expected to be fined billions of dollars by the FTC. The agency had been investigating the company since the Cambridge Analytica scandal erupted last year.