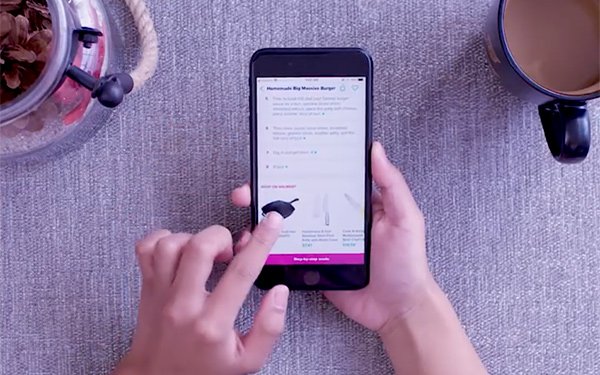 Walmart and BuzzFeed’s cooking vertical Tasty are expanding their partnership by launching a shoppable recipe feature, allowing consumers to add the ingredient list from a Tastyrecipe on the iOS app directly into a Walmart online grocery cart for pickup or delivery.

Tasty has 4,000 recipe videos on its app. With the new feature, users can click on a recipe in the app, click “Add items to grocery bag” below the ingredients list, and all the ingredients are automatically added to their cart.

Users can swap items within the Tasty app, based on price, brand, quantity or dietary preferences.

When all the items are ready in their cart, the Tasty app takes the user to the Walmart Grocery app or site, where they can  purchase the ingredients and schedule their groceries for pickup or delivery.

“Finding that perfect recipe, creating a grocery list and finally getting to the store can keep any chef out of the kitchen,” stated Janey Whiteside, Chief Customer Officer at Walmart. “We’re excited to create a fun solution that feeds customers appetites to put time back in their busy schedules."

Walmart offers pickup from more than 2,500 stores and delivery from 1,100+ stores across the country.

“More than two-thirds of our audience has made a Tasty recipe, and 90% of Americans live within 10 miles of a Walmart store, so we’re excited to build upon our partnership with Walmart and provide a new feature that will solve the pain point of grocery shopping and make it even easier for our audience to cook their favorite Tasty recipes,” stated Ben Kaufman, BuzzFeed’s Chief Marketing Officer.

BuzzFeed and Walmart previously collaborated on a Tasty kitchenware line featuring over 120 nonstick cookware, bakeware, kitchen gadgets and accessories. The product line has sold more than 4 million units since launching in March 2018.

Later this year, Walmart is also launching Tasty branded products within the celebrations, dry grocery, deli and frozen meats departments, among others.

Shoppable recipes is powered by the Northfork platform, which integrates Walmart’s website and app with Tasty’s recipe content.

This feature is "the first of many upgrades" to come on the Tasty app, according to the company.