Q&A: Learning From the DTCs: Flex and Test 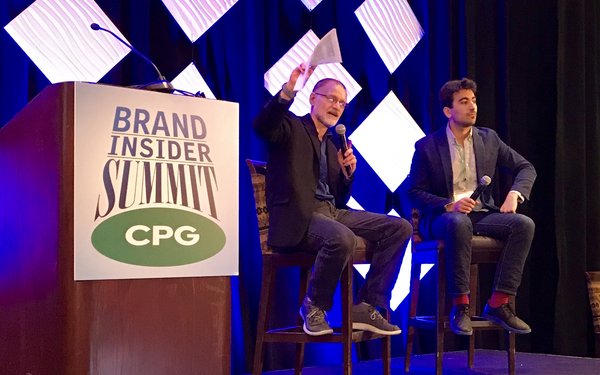 Dan Rosen, Marketing Ad Creative Director (above, right), told our Brand Insider Summit CPG audience on Monday that the company did so to gain access to data about what people are interested in buying so that it can move forward eventually with offering color lenses or other types of lenses.

Steve Smith, VP, Editorial Director of Events at MediaPost, interviewing Rosen, rather incredulously asked him, "This is data about the behaviors of contact-online buyers that your competitors don't have?" "Correct," said Rosen.

Hubble also has developed a category-busting way to introduce or test new products. "We wanted to try eye drops," said Rosen, but the cost of designing and manufacturing eye drops would be too much for a test. So he added the offer of eye drops to the website using a mock eye drop brand and launched ads to see what the demand would be.

"We refunded the buyers," he said. "We never had the product. We are using social as a testing ground. We assume we're idiots but that people will tell us what they want." It was one of the reasons it started Contacts Cart (selling competitors' contacts). To get feedback and data. "Access to consumers in invaluable," he said.

Does Hubble worry that consumers will be turned off by these marketing methods?

"Think about what Google does all the time," he said. "We're all being used but the purpose is to better a service and a product."

Said Smith, "The DTC generation represents a new class of consumer that's in on the game. We are test subjects."

That awareness extends to waking up the consumer as to why they are paying so much for a product when they don't have to.

Hubble uses social channels to advertise its product, tweaking offerings as feedback flowed in. "We used this feedback as a data collection tool." Letting the consumer drive where the brand is going.