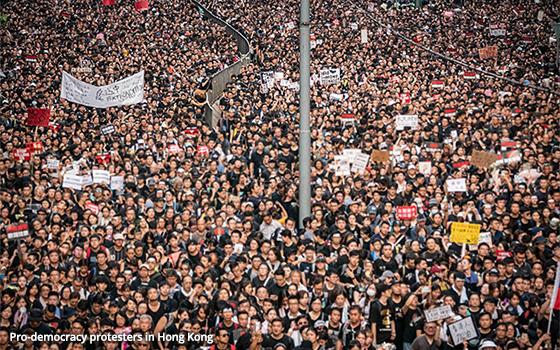 Escalating its brewing battle with the Chinese government, Twitter says it will no longer accept advertising from state-controlled news media entities.

Along with a similar response from Facebook, Twitter is also suspending nearly 1,000 accounts thought to be tied to a Chinese disinformation campaign against pro-democracy protesters in Hong Kong.

The disinformation campaign in question was intended to “sow political discord in Hong Kong, including undermining the legitimacy and political protest movement on the ground,” Twitter said on Monday.

Accounts impacted by the broader policy change can continue to use Twitter -- just not the company’s ad products.

“This policy will apply to news media entities that are either financially or editorially controlled by the state,” Twitter said.

Twitter said the new policy -- which does not apply to taxpayer-funded entities, including independent public broadcasters -- was informed by a host of academic and civil society leaders.

Twitter said it will be making policy determinations on the basis of several key issues. They include media freedom and independence, such as control of editorial content, financial ownership, influence or interference over broadcasters, editors and journalists, direct and indirect exertion of political pressure, and/or control over the production and distribution process.

In addition, the new policy will not apply to entities that are exclusively dedicated to entertainment, sports and travel content.

Once notified, affected entities will have 30 days to offboard from Twitter’s ad products, at which point, the company said it will strictly enforce its new policy.
advertising, asia, china, news, politics, social media, twitter
1 comment about "Twitter Bans Advertising From State-Controlled News Media".
Check to receive email when comments are posted.
Next story loading