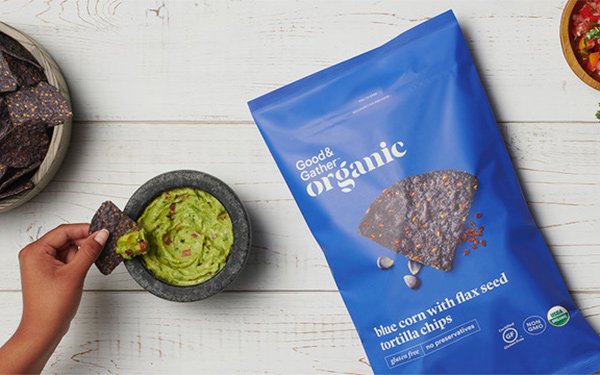 In its largest branding initiative ever, Target is rolling out a private-label food line called Good & Gather, meant to strengthen its position in the grocery world. The Minneapolis-based chain plans to begin the launch of the line next month, eventually phasing out its Archer Farms and Simply Balanced lines. By the end of next year, Good & Gather is set to include some 2,000 items.

“Target has needed to build its food business as a percentage of total revenues, which right now is less than half of Walmart’s,” says Don Stuart, managing partner at Cadent Consulting Group, based in Wilton, Connecticut.

That’s key, he tells Marketing Daily, because “if you can get people to come in for food, they come in once a week, not once a month.”

And because of its success in other private-label offerings, including many soft lines throughout the store, “Target  has more permission to deliver on the expectation of quality than Walmart does. Walmart’s offerings are still seen as driven only by cost, while Target can offer a true brand.”

The launch comes at a time when U.S. consumers have a deepening relationship with private-label groceries. For years, Stuart says, sales of private-label goods would rise during recessions, then retreat as the economy recovered. But since the 2008 recession, private label has continued to gain in share.

Of the estimated $800 billion in food and beverage sales each year, not including restaurants, Stuart says private label now commands about 19%.

Some of those gains are because millennial shoppers are more open to store brands, Cadent’s research has shown. And they are also more likely to shop store perimeters, where they can find private-label brands in places like the dairy aisle. Another reason is the rise of high-quality private-label brands at Whole Foods Market and Trader Joe’s.

Additionally, the growing popularity of deep discounters, such as Aldi, as well as the tiered private-label offerings at chains like Kroger and Safeway, have made them more appealing.

While not all organic, Good & Gather products are made without artificial flavors and sweeteners, synthetic colors and high fructose corn syrup, and come with a money-back guarantee. And besides standbys like milk, eggs and cheese, there will also be trendier offerings like avocado toast salad kits and beet hummus.

Stuart, impressed by the size of the launch, expects Target to “do a bang-up job. This will help close the gap in food sales, build loyalty and help increase internal margins.”