'Dancing With the Stars' Is Outrage Industry's New Target 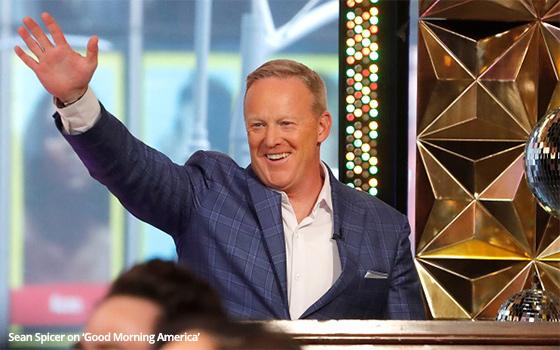 The outrage industry is now turning its ire on -- wait for it -- “Dancing With the Stars.”

The crime for which TV's happiest, liveliest, and most dancingest show now stands accused: enlisting former Trump White House press secretary Sean Spicer as one of the dancing contestants on the show's upcoming 28th incarnation, premiering next month.

Sean sure looked happy on “Good Morning America” last week (photo above) as ABC introduced the world to the new season's roster of “star” contestants. Little did he know that an anger backlash would threaten to engulf him in the days to come.

Even now, on Friday morning, as this TV Blog is being written, it is reasonable to wonder whether Spicer's position on the new season's “DWTS” talent roster is secure. Or whether he will have been removed over the weekend, even before this blog’s publication on Monday morning.

On Friday, the pressure was on as Disney bore the brunt of complaints from various parties, including the host of “DWTS,” Tom Bergeron, and the executive producers of at least three of its prime-time series.

At least Bergeron is a stakeholder in the fortunes of the show -- even if it is easy to disagree with his belief that Spicer's presence on “DWTS” threatens to make the show “divisive.” These other producers have no such stake, but they evidently have such outsized opinions of themselves that they took to Twitter to stamp their feet and shake their fists at Disney.

Bergeron was the first to tweet his misgivings about the drafting of Spicer for “Dancing With the Stars.”

“A few months ago, during a lunch with [the show’s] new executive producer [Andrew Llinares], I offered suggestions for season 28,” Bergeron wrote (according to The Hollywood Reporter).

“Chief among them was my hope that ‘DWTS,’ in its return following an unprecedented year-long hiatus, would be a joyful respite from our exhausting political climate and free of inevitably divisive bookings from ANY party affiliations. I left that lunch convinced we were in agreement.

“Subsequently (and rather obviously), a decision was made to, as we often say in Hollywood, 'go in a different direction'."

The problem with Bergeron's opinion here is that it is doubtful Sean Spicer will do anything more political on “DWTS” than to try his best to master the tango and the foxtrot.

Moreover, it should have come as no surprise to Bergeron, a veteran of the TV business, that the boss of his show would dismiss his concerns.

However, it was not long before the two producers hopped on the “Drop Spicer” bandwagon. “I deeply abhor this decision by the company I work for and truly love,” tweeted Krista Vernoff, executive producer of ABC's long-in-the-tooth doctor show “Grey's Anatomy.”

“This man lied daily, to our faces, and made a mockery of our country. This is not cause for celebration or celebrity. It’s not too late to change this plan,” she wrote, adding the Twitter handles for the show, the network and Disney CEO Robert Iger.

Well, maybe some people believe TV makes a mockery of our country, and no one is calling for the end of television (but perhaps this subject can be taken up in a future TV Blog).

Support for Vernoff’s deep abhorrence of this casting decision was soon expressed by another producer, Tim Doyle, of “Schooled” and “The Kids Are Alright,” who indicated in a tweet that he favors a boycott of “DWTS.” Oh, brother.

For his part, Spicer expressed his hope in an interview with THR that the show will be a “politics-free zone.”

“My hope,” he said, “is that at the end of the season, Tom looks back on this and realizes what a great example it was of being able to bring people of really diverse backgrounds together to have fun with each other, engage in a real civil and respectful way and maybe show millions of Americans how we can get back to that kind of interaction.”

Anybody got a problem with that?