Comedian In Cars: Jay Leno And The Art Of Amiability 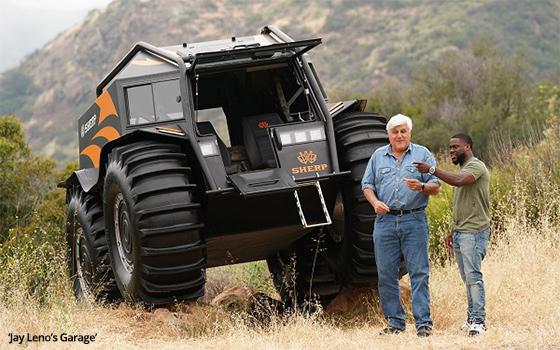 Watching Jay Leno on his CNBC show “Jay Leno’s Garage” can make one wistful for a simpler time -- namely, the era in which he was the nation’s highest-rated late-night comedian.

For a generation, late-night TV was characterized mainly by the competition between two highly paid and very different network rivals -- Leno and David Letterman -- in an era spanning roughly 20 years (1993-2014).

Most TV critics favored Letterman over Leno in those years, even if Leno was more popular generally (according to the ratings). Letterman was more cerebral, the critics said.

He was moodier, harder to peg, and in his use of television’s more visual qualities, more experimental than Leno. On the other hand, it is reasonable to debate the value of many of his experiments such as the “visual effect” that would result when a pumpkin was dropped from the Ed Sullivan Theater roof.

As a counterpoint to Dave in the Jay vs. Dave era, Jay went in the opposite direction. Where Dave could seem crabby and temperamental sometimes, Jay worked hard to perfect what you might describe as the art of amiability. Jay Leno wanted to be liked.

Since 2015, Leno, 69, has starred in his own car show, “Jay Leno's Garage,” on CNBC. The show was spun off, you might say, from the series of short videos of the same name that NBC produced and posted online while Leno was host of “The Tonight Show.” “Jay Leno’s Garage” returns Wednesday night (August 28) for its fifth season.

On his car show, Leno projects the same amiability that he exuded on “The Tonight Show.” It is why watching “Jay Leno’s Garage” is such a pleasant thing to do for an hour.

On the show, Jay is easygoing, fun-loving, quick with a mild joke or two, hospitable and generous with his guests -- some celebrities and some not, but all people who have a connection to the cars he features on the show.

So why should such amiability produce wistfulness? Because amiability in our national television media -- whether we are talking about news, talk or entertainment -- is increasingly a thing of the past. It is almost as if Jay Leno has the amiability sector all to himself -- as a kind of last man standing in the arena of niceness.

The season premiere episode of “Jay Leno's Garage” is devoted to extreme vehicles -- including the off-road specimen pictured above, in which Leno takes comedian Kevin Hart on a bumpy ride that Hart never bargained for. Hart may have been chosen for the segment because of his height. At 5’4”, he is about as tall as the vehicle's tires.

Elsewhere, Jay introduces us to a $750,000 Ford truck that has been equipped to drive directly into tornadoes and take measurements from inside the funnel. This particular truck belongs to meteorologist and storm chaser Reed Timmer, who starred on “Storm Chasers” on Discovery.

On “Jay Leno’s Garage,” Timmer and Leno sit in this storm-chasing car facing the rear exhaust of a high-powered jet plane to simulate the effect that a tornado or hurricane would have on this vehicle.

This sequence was likely expensive, challenging to choreograph and, by all appearances, not 100% safe for its two celebrity participants, although we can be fairly certain no one was willing to risk Jay Leno's life to film this scene -- especially Leno.

Elsewhere, Leno leads an SUV full of supposed hitmen on a high-speed chase while he drives an armored, bulletproof Audi outfitted with a number of James Bond-like security devices.

Throughout the show, the point is made: This amiable comedian turns out to be a showman.

automotive, tv
1 comment about "Comedian In Cars: Jay Leno And The Art Of Amiability".
Check to receive email when comments are posted.
Next story loading