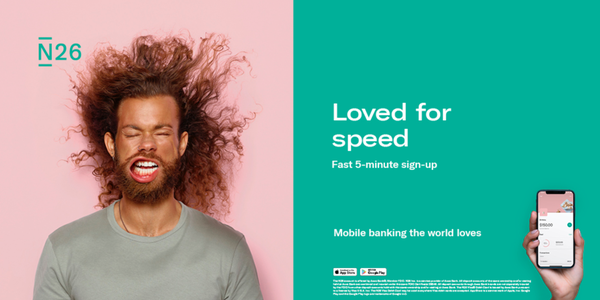 The theme is “love” and the aim is to get millennial and Gen Z consumers to fall in love with the direct bank.

Featuring love in the campaign was important since it is a bold statement to associate the word with banking, according to the company. The theme allows N26 to "connect with millennial and Gen Z consumers in a more human and emotional way" -- a strategy rarely used by banking institutions, per the company.

Each ad highlights a specific feature of N26 that users love: transparency, getting paid up to 2 days early, and security.

The campaign launches with out-of-home in New York on subways/cabs/buses and then will be followed by San Francisco and Chicago across a range of channels including digital, social, customer relationship management and a program targeting students.

The idea for the campaign was developed in-house by N26’s internal marketing team. The agency DiNoto helped with the execution, according to a company spokesperson, who adds that the bank launched in the United States in July with 100,000 users on the waitlist and a few thousand signing up each week since beta launch.

“We want to solve the pain points that customers usually have with traditional banks: hidden fees, slow and complex sign-up process, poor digital experience.” Koop tells Marketing Daily. ”The campaign highlights some of the main things users love about N26 like real-time notifications and user controls like lock/unlocking your card, and even the beautiful app design. Our goal is to empower all customers to live and bank their way."