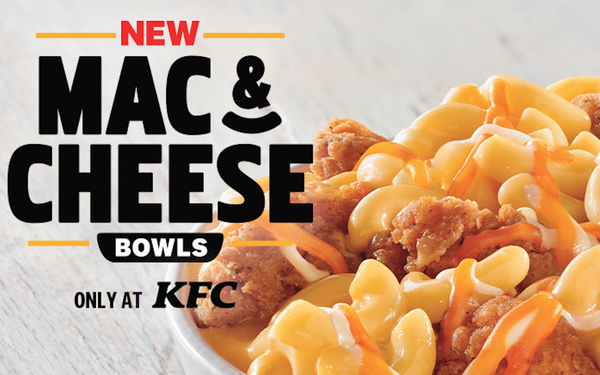 Kentucky Fried Chicken is dipping a tiny finger into the plant-based meat substitute business with a single-outlet test of Beyond Fried Chicken nuggets today in Atlanta.

This move coincides with KFC adding to its menu Mac & Cheese Bowls, a cheesy twist on its Famous Bowls, in a partnership with food critic Kalen Allen.

KFC says it’s the first national quick-serve chain to offer a plant-based chicken product in what it describes as “an exclusive, one-restaurant test.” The supplier is Beyond Meat, and customer feedback will be considered as KFC evaluates “a broader test or potential national rollout,” according to a news release.

Complimentary samples will be available today from 10:30 a.m. to 6:30 p.m. with the purchase of any KFC menu item. Diners who desire a plant-based meal can purchase nuggets in combo meals or boneless wings in six- or 12-piece options.

"KFC Beyond Fried Chicken is so delicious, our customers will find it difficult to tell that it's plant-based," said Kevin Hochman, president and chief concept officer, KFC U.S.

The Louisville, Kentucky-based KFC did not say how it chose the Atlanta outlet for the test. “This limited, one-restaurant test of Beyond Fried Chicken is part of KFC's continued commitment to understanding its consumers' tastes and preferences,” the release stated.

Crafted as a main dish, Mac & Cheese Bowls are topped with crispy popcorn chicken and sprinkled with a three-cheese blend. Kalen, the host of OMKalen, was given the first opportunity to sample the new offering and share the results with his followers via this video.

In reporting its second-quarter earnings on August 1, KFC parent Yum Brands reported that KFC delivered its 16th consecutive quarter of positive same-store sales growth worldwide. Eight out of 13 markets saw same-store sales growth of 6% or more, with Africa and Japan leading the way. Same-store sales in the United States rose 2% concurrent with the return of Chicken and Waffles and the introduction of Cinnabon Biscuits to its menu.