With All Eyes On Osaka, Williams, Nike Fashion's In Spotlight 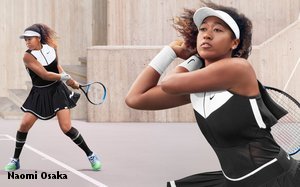 The U.S. Open is made for fashion statements. While tennis stars try and make a splash every time they storm the court, it’s especially true when they head to Queens in the late summer, catching New York’s attention just as it’s heading into Fashion Week.

It’s been a year since Naomi Osaka’s heart-stopping victory over Serena Williams, and all eyes are on the reigning champ.

Nike, which calls Flushing tennis’ “de facto runway,” says the young star is playing in an exclusive NikeCourt x Sacai collection. Led by designer Chitose Abe, the Japanese fashion label is best known for unusual silhouettes that aren’t what you think they are. From a distance, one looks like a tennis dress. A closer look shows it’s more like a modern bodysuit.

Nike also celebrated the tournament with a "Queens of the Future" pop-up experience, which gathered local New Yorkers and 12 of the best professional players in lower Manhattan “for a new twist on a classic tennis training game.” It included stars like Osaka, Williams and Maria Sharapova, all in Nike sportswear and tennis apparel.

Osaka, the first  Asian player to be ranked No. 1 in the world in singles tennis, is also a spokesperson for Nissan and Muzik, which is using her to front a new line of wireless, smart headphones powered by Google Assistant.

Adidas, meanwhile, is also out to strut its New York style. Its athletes are playing in the NY collection, designed in collaboration with the Brooklyn Creator Farm. The company says the clothing is “inspired by the streets of New York City and urban tennis culture.”