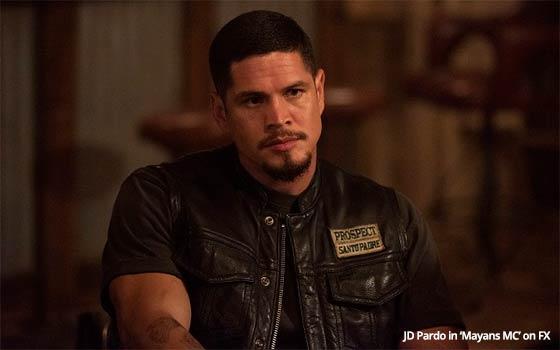 Those looking for low-pressure occupations, and lives that are reasonably stress free, would be well advised to steer clear of the motorcycle gang life.

If the FX series called “Mayans MC” (and its high-octane predecessor “Sons of Anarchy”) is any indication, this is a high-stress world in which to make one’s way. What with the drug-trafficking, the gun-running and the murdering, it is a two-wheeled lifestyle under constant threat from surprise potholes.

These could include any number of local and federal law enforcement officials, rival gangs and even fellow members of one's own gang.

In the second-season premiere of “Mayans MC” airing Tuesday night on FX, another party emerges to threaten the show's titular MC (motorcycle club) -- a troop of soldiers for hire made up of ex-Green Berets.

As the new season opens, these mercenaries are teamed up with the Mayans on some kind of campaign to rid a neighborhood south of the Mexico-California border of a group of interlopers who pose some sort of threat to the Mayans in that area.

As usual with series like this one, I sometimes struggle with understanding the complexities of the relationships between the show's many different groups. One minute they are allies, and the next minute, they are enemies. And no matter which they are, at any moment, all hell can break loose. This happens at least twice in the season premiere of “Mayans,” a show that more than satisfies a viewer's bloodlust, if this is what one looks for in a TV show.

Like “Sons of Anarchy” before it, “Mayans MC” is very well-made. The casting in particular of these shows has always been one of their best features, with actors interspersed, seemingly, with real motorcycle gang members and ex-cons. Or at the very least, even if every last one of these gang members is an actor, they are wholly convincing as very tough, real-life career criminals.

The seedy locations chosen for the show are also one of its best features. This has been a particularly strong characteristic of FX's grittier drama shows ever since “The Shield” (2002-08).

The almost constant threat of violence, and the occasional eruption of it in each episode, can make watching “Mayans” a stressful experience in and of itself. These scenes, and the suspense leading up to them, are no doubt attractive to some and repellant to others.

As with most things, liking “Mayans” depends on one's individual taste. One either enjoys watching scenes of stylized violence (and some sex) or one does not. For the TV Blog, the violence of “Mayans” holds no attraction today, even if it once did. Today, the real world is violent enough.