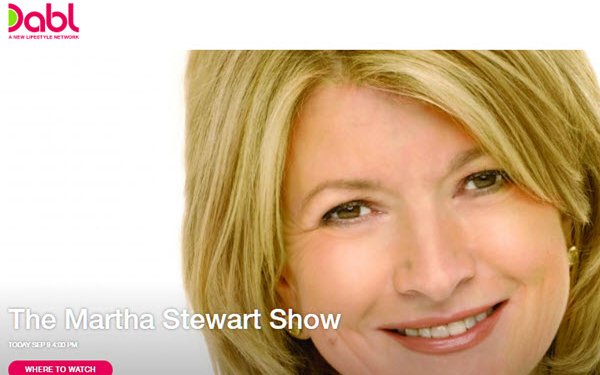 The network — the first at CBS to be 100% built and operated in the cloud, using CBS’s own media operations platform — is as of today airing across the digital spectrum of TV stations nationwide, including the CBS Television Stations group in many major markets.

The network is cleared in more than 80% of the country, including all of the top 25 markets, according to CBS, which has posted a complete list of the stations carrying Dabl on the new network’s website. The digital broadcast networks carrying Dabl include Univision Communications, Meredith Corp., Capital Broadcasting and Sinclair, among others.

Dabl’s lineup includes archival episodes of “The Martha Stewart Show” and “Martha Stewart Living” (airing weekdays and weekends respectively), and “The Essence of Emeril” (running every day of the week).

Other archival shows being aired on weekdays include “Cityline,” “Doctor & the Diva” and “Sell This House.” Other weekend offerings include “Cesar 911,” “Everyday Baking,” Everyday Food,” “Find & Design,” “Flip This House,” “Flipping Boston,” “Flipping San Diego,” “In the Kitchen With David,” “Pet Project,” “Pick A Puppy” and “San Diego Zoo.”

CBS had been discussing a first-run lifestyle-type show for years, Steve LoCascio, chief operating officer and CFO of CBS Global Distribution Group, told Variety in June. “It’s a sweet spot for our ad sales team. We realized that a digi-net in that space could focus on cooking, home improvement, pets — things that would allow our ad sales guys to drive all kinds of revenue behind this.”

CBS’s first-run distribution arm has the infrastructure to sell and maintain a channel offered in a syndication-like deal to station buyers on a market-by-market basis, noted the report.

CBS controls all of Dabl's ad inventory. Station partners outside of the CBS owned and operated group, which covers 38% of U.S. TV households, receive fees for distribution.