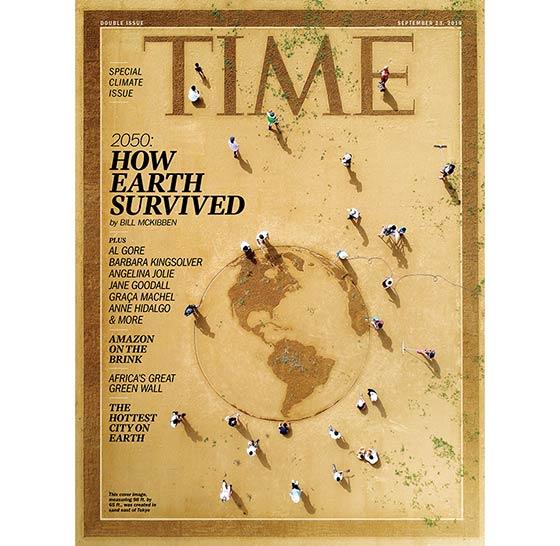 The issue features an essay by author Bill McKibben that flashes forward to the year 2050, looking back on the steps society took to adjust to or stop climate change. It also features reporting from every continent with Time contributing editor Angelina Jolie writing about why the world needs to help Pacific Islanders as climate change progresses.

Also offering their viewpoints on climate change are Al Gore, Jane Goodall and Graca Machel, former Education Minister of Mozambique and founding member of The Elders.

Addressing why the magazine is tackling an issue on climate change now, Time EIC-CEO Edward Felsenthal wrote: “Human nature, like journalism, is deadline-­oriented. Our intent with this issue—only the fifth time in our history that we have turned over every page of a regular issue, front to back, to a single topic—is to send a clear message: We need to act fast, and we can.”

Launching with the issue is a new AR experience called “Inside the Amazon: The Dying Forest” that allows a user to follow a team of journalists sent by Time deep into the Amazon. The experience touches on indigenous people fighting illegal logging and paths cut away in the forest by loggers, among other scenarios.

A new biweekly climate-focused newsletter called “One.Five” is also launching with support from Time climate correspondent Justin Worland. The newsletter will connect major stories and issues to climate change and track progress across industries. The UN’s goal is to keep global temperatures from rising more than 1.5 degrees Celsius by 2050.

“Notably, what you will not find in this issue are climate-change skeptics. Core to our mission is bringing together diverse perspectives,” Felsenthal wrote in his letter. “Experts can and should debate the best route to mitigating the effects of climate change, but there is no serious doubt that those effects are real.