Milk Board Fights Conspiracy Theories With 'Funny Or Die' Video 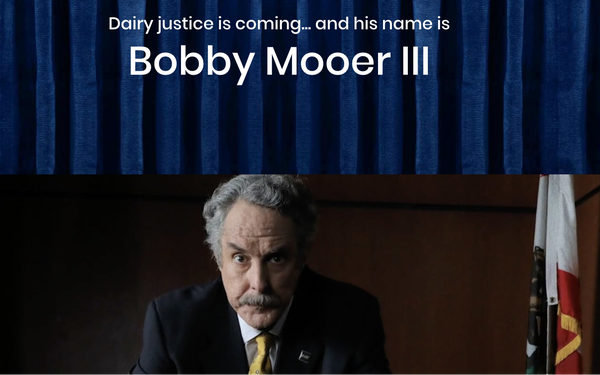 In an effort to combat what it considers conspiracy theories being circulated on the internet about the dangers of milk, The California Milk Processor Board has launched "The Mooer Report," in partnership with the comedy video website “Funny Or Die.” Front and center in the new brand campaign is Bobby Mooer III, Special Counsel for the Department of Dairy Justice.

The fictitious Mooer is described in a “Funny or Die” video as having grown up on a dairy farm in Oshkosh, Wisconsin. One of his early hobbies was sculpting sticks of butter so that they resembled…sticks of butter, before growing up and becoming a dairy lawyer. Eventually, he becomes outraged at the false statements being made about milk on the internet and decides to take action.

Google the words “conspiracy theories about milk” and you’ll encounter myriad claims about why milk is unhealthy and how the dairy industry is supposedly in cahoots with the U.S. government. In one example, People for the Ethical Treatment of Animals asks, “How on Earth did our society end up thinking that another species’ breastmilk, filled with saturated fat and cholesterol, was somehow vital to human health? Seriously, some 60 percent of humans can’t even digest cow’s milk.”

Mooer takes these naysayers head on with Tweets from @themooerreport that include “Trolls don’t like #milk. And I don’t like trolls.”

The first non-video edition of The Mooer Report, which is expected to be released next week, is titled “Report on the Investigation to Preserve the Integrity and Reputation of Milk.” It’s expected to contain information on positive aspects of liquid dairy products while debunking alternate claims.

Other celebrities and social media influencers involved with The Mooer Report include actress Yvette Nicole Brown, who also appeared on “Community”; Arielle Vandenberg, the host of “Love Island USA”; and Matt Cutshall, who the CMPB describes as a “social media superstar.”

CMPB’s latest effort comes as alternatives like almond- and oat-based beverages labeled “milk” continue to help erode consumption of traditional dairy milk. According to the Dairy Farmers of America, traditional milk sales fell by $1.1 billion in 2018. Nielsen data for the 52 weeks ended June 1, 2019 show a drop in sales of milk products of 2%. The number of U.S. households that consume at least one glass of milk per day are down 5% since 2010, and the number of those that drink at least four glasses a day are down by 23%, according to MRI-Simmons.

Given the rise of almond milk -- the most popular non-dairy form, per The Hartman Group -- the dairy industry recently tried and failed in federal court to have almond milk labeled “imitation milk” in a class-action lawsuit involving Blue Diamond Growers.