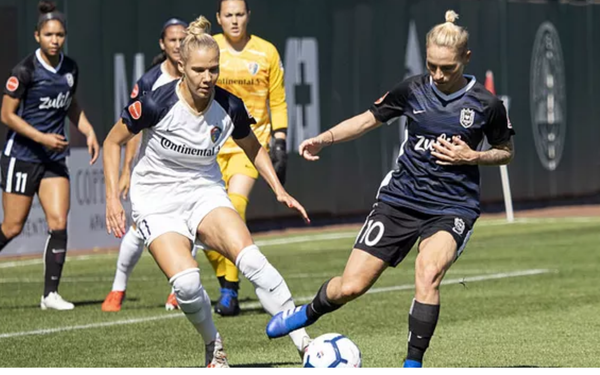 Procter & Gamble’s Secret deodorant says it will buy 9,000 seats to boost attendance at National Women’s Soccer League (NWSL) games this season, another attempt by the brand to align itself with the sport and women’s equality campaigns.

In July, Secret  donated $529,000 to members of the U.S. Women’s National Soccer team, which comes out to $23,000 for each of the World Cup-winning players. That donation was intended to highlight the gaping pay difference between what women get paid compared to what the men’s club members receive.

For the soccer league ticket-buying effort, Secret will purchase 1,000 tickets for home games at each of the nine stadiums of league teams. The first ticket buy occurs tomorrow for the North Carolina Courage in Cary, North Carolina, a suburb of Raleigh. The last one adds 1,000 fans to the Portland Thorns FC game that will be played in Oregon.

In each of those cities, the P&G-bought tickets will be offered to women’s organizations and sports teams and leagues to encourage support of women’s sports.

“As a brand for women run by women, we wholeheartedly believe women should not have to sweat gender inequality,” punned Sara Saunders, Secret’s associate brand director, in a statement.  She said the effort was Secret’s way of showing support to “ensure that female athletes have a platform to play and get the attention they deserve.”

Things seem to be on the uptick for the league.  In its first season in 2013, its games averaged 4,270 fans — but by last season that number increased to 6,024. This season, according to Soccer Stadiums Digest, attendance is averaging 7,196, running 19% ahead of last year. The league is considering expansion in 2020.

ESPN will show a total of 14 NWSL games this season.

Secret’s history of support for the Women’s National Soccer team goes back to 2018 and has included soccer-themed YouTube videos and special Secret packaging featuring the team’s stars. When it made its $529,000 donation to the members of the women’s team after it won the World Cup,  the brand took out a fuil-page ad in The New York Times, headlined  “Women Just Made History. But They Have Always Deserved Equal Pay.”

That’s a goal women still haven’t achieved at the pro level, either.

Brand involvement with women’s sports and equality issues is also occurring in Ireland. The accounting and business services company KPMG and others are aligned with sports federations there sponsoring program called 20x20, a movement that aims to create a cultural shift in society through a 20% increase in participation in, media coverage of, and attendance at women’s sports by 2020. Its rallying cry is “If she can’t see it, she can’t be it.”