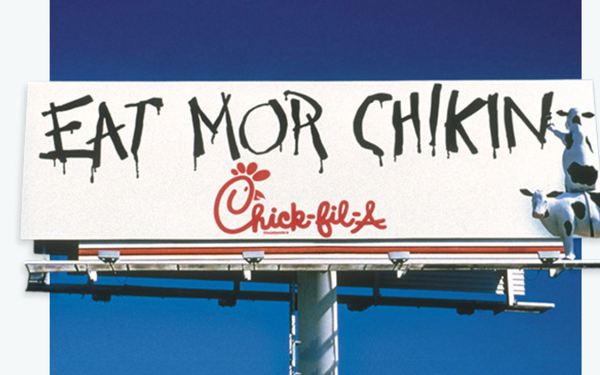 So who won the Great Chicken Wars of August? Data from mobile devices shows that following the cacophony of social media cackling about the virtues of competing chicken sandwiches from Popeyes and Chick-fil-A, the latter restaurant chain enjoyed by far the biggest boost in foot traffic:16.5%.

Overall, however, the entire fast food chicken category received about the same total foot traffic despite all the viral posts, according to Gravy Analytics. More people visited Chick-fil-A and Popeyes, but that foot traffic came at the expense of other restaurants in the space.

Gravy Analytics analyzed 4.81 million consumer attendances at restaurants categorized as Fast Food-Chicken between July 1 and Aug. 31 based on location data the company aggregates from data providers.

Things got started on social media when Popeyes, which had never sold a chicken sandwich, launched a spicy chicken version on Aug. 12, the same day Chick-
Fil-A introduced Mac & Cheese to its menu. A week later, Chick-fil-A tweeted about its own chicken sandwich, prompting Popeyes to reply with a, "Y'all okay?," which quickly went viral and ignited a fusillade of comments from consumers over which was the better sandwich.

Gravy found that Chick-Fil-A  enjoyed increased foot traffic after introducing Mac & Cheese and promoting its chicken sandwich as an alternative to the new Popeyes offering. Average daily foot traffic following the menu change (Aug. 12-31) was 16.5% higher than for the prior period (July 22-Aug. 11), according to Gravy.

Foot traffic at Popeyes increased after the company’s viral tweet on Aug. 19, with a big rise starting on Aug. 20 and spiking on Aug. 24. By Aug. 27, Popeyes announced that it had sold out of its chicken sandwich, and foot traffic began to decline.

So what are takeaways for restaurant operators?

“When two brands face off on social, like what happened recently with Popeye's and Chick-Fil-A, it can drive flocks of hungry customers to stores but also lead to long lines and product shortages,” Gravy CEO Jeff White tells Marketing Daily.

White suggests that “other QSR brands looking to get in on the action join in the game instead of watching from the sidelines."

He adds, "Use social to stress that you are open, have plenty of chicken sandwiches and happy servers at the ready. Then leverage location data to determine which people are prime for conquest marketing.”