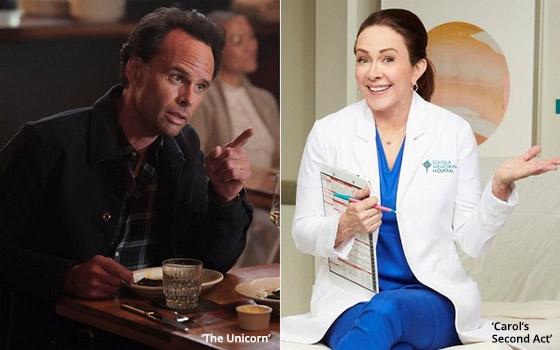 The stakes are so low in the new CBS comedy called “The Unicorn” that you might even conclude they are nonexistent.

In a nutshell, the logline for this show seems to be: A 40-something widower is urged by his friends to start dating again because it has been a full year since his wife died.

While watching the premiere episode of “The Unicorn” late last week, this thought occurred to me: Why does this guy, who evidently loved his wife very much and still mourns her, have to date anyone if he doesn't want to? Then I answered my own question: He doesn't really have to date anyone.

However, if he was not coerced by his friends to start dating again, there would be no show. The show's title even implies that this is likely to be this comedy's main storyline.

As defined in the series premieres, a unicorn in this context is a name that has apparently been awarded to men on dating web sites who are highly desirable for a combination of reasons that make them as rare as unicorns. Hence this nickname. Thus, the show is apparently about this widower's adventures in middle-aged dating.

In “The Unicorn,” this titular mythical beast is played by Walton Goggins (pictured above left), who has emerged in recent years as a very busy actor in movies and TV shows (he first gained fame on “The Shield” on FX).

The character's reticence about dipping his toe into the dating scene is so palpable that his friends’ coercive insistence that he do so borders on cruel. After he agrees to post his profile on a dating site, and receives a number of pings from interested females, this decision to date again traumatizes one of his young daughters. This is played tastelessly for laughs.

“The Unicorn” might remind some viewers of the ABC comedy called “Single Parents,” although “The Unicorn” concerns itself with just one single parent instead of a group of them.

A similar gambit is being tried at 9:30 Thursdays on CBS with the premiere this week of “Carol's Second Act,” starring Patricia Heaton (above right) as the titular Carol. This show has been slotted after “Mom,” which returns for its seventh season Thursday night at 9.

Who doesn't love Patricia Heaton? Well, everybody loves her -- thanks to “Everybody Loves Raymond” and “The Middle” (on ABC). But this new show is more difficult to love.

The series premiere has Heaton playing a newly minted medical resident at a large city hospital. She is a 50-something former teacher who decided to pursue a medical degree after her teaching career had run its course.

In the premiere, we see Carol in her first day of her new residency as she meets and interacts with her fellow residents -- one woman and two men who are much younger than she.

We also meet her hard-nosed supervisor, and a high-ranking, veteran doctor who is a doofus inserted into the show apparently to provide comic relief. Yes, you read that right -- comic relief for a comedy show. This doctor is played by Kyle MacLachlan.

The premiere episode is a tough slog. Throughout most of it, Heaton seems like she is overdoing it. The character is given to yakking away uncontrollably, presumably as a way of showing she is nervous.

In the final minutes of the episode, Carol calms down and so does the show. At that point, it looks like the cast and crew began to steer toward whatever this show eventually wants to be.

In Episode One, however, it is a formulaic hospital comedy of the kind we have seen many times before -- and will likely continue to see, if CBS has anything to say about it.