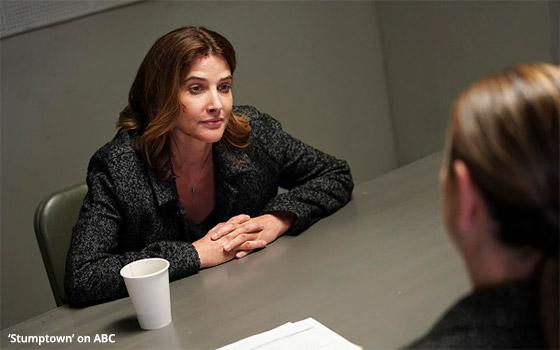 Clear away the clichés and you just might just uncover a sparkling new TV show.

That was the TV Blog’s reaction after watching the series premiere of “Stumptown,” which takes up the 10-11 p.m. slot on ABC Wednesday night (Sept. 25).

The show is about a swashbuckling single woman named Dex Parios (yes, that is her name) played by Cobie Smulders (photo above), who was last seen in the CBS comedy called “How I Met Your Mother.”

In “Stumptown,” she is playing someone who may or may not be a private investigator, although in the series premiere, she is twice hired to work in this capacity. This has something to do with her former career in the United States Army, in which she deployed five times to Afghanistan -- or “five tours of duty,” as they say (apparently) in the military.

While it is probably true that some very dedicated servicepeople have served as many as five tours in this long War On Terror of ours, it seems is if this is an unusually high number. Thus, it is a cliché on the part of this TV show to saddle our heroine with this kind of unusual background. One, two or even three tours would have sufficed.

Whether she is, or is not, a legally licensed PI, Ms. Parios seems to spend most of her time drifting (or driving) around Portland, Oregon, in a rundown 1992 Mustang with a ’70s mixtape wedged permanently in the dashboard cassette player.

In case you did not know, “Stumptown” is a nickname for Portland, which on another great TV show went by the name “Portlandia.”

In the premiere episode of “Stumptown,” we learn that Dex suffers from PTSD from her experience in Afghanistan, she drinks a lot, owes money to a local Indian casino because she is addicted to gambling (apparently), cannot pay her household bills and she sleeps around.

In the episode airing Wednesday, she and a one-night stand partner have one of those scenes that have become a staple cliché of network TV in general and ABC in particular -- the intense, overheated sex scene in which each participant tears and paws at the other's clothes while the camera jumps up and down and circles them just as feverishly.

It sometimes seems as if someone in the department at ABC that oversees the production of shows such as this one must insist that every show have one of these scenes. In this case, maybe ABC was hoping for reviews that could not resist employing the phrase “Smulders smolders.” Well, ABC, the TV Blog is wise to you, and there is no chance of that happening here.

The story in the series premiere of “Stumptown” has Dex trying to find the missing granddaughter of the Indian casino’s female chief as a way of paying off Dex's debt to the casino.

When you strip away the Afghan war and PTSD backstory, plus all the other character defects the show's writers have piled on this poor woman's slender shoulders, the show emerges as a high-quality detective show, complete with a series of eccentric, criminal lowlifes, a modicum of mystery, and taut action scenes that are well-choreographed.

The action scenes are thrilling and entertaining. They are more than enough to keep a viewer tuned to ABC for “Stumptown.” Dex’s occasional Afghanistan flashbacks and her sex romps are not nearly as interesting.