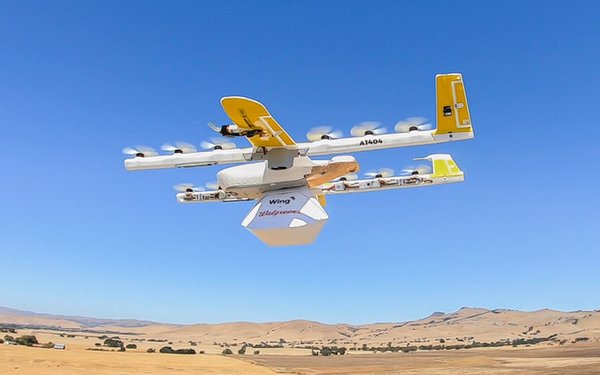 Drone delivery has been the buzz of retailers and ecommerce companies for years now, but Walgreens is declaring itself the winner. The pharmacy giant says it is launching a test in Christianburg, Virginia, starting next month.

Walgreens, based in Deerfield, Illinois, is working with Wing Aviation, owned by Alphabet. FedEx is also in on the partnership, helping to provide “store to door” delivery.

The pilot plans to get small orders in customers' hands within minutes of ordering, using the Wing app.

Earlier this year, Wing became the first company to win certification as an air carrier by the Federal Aviation Administration.

Other retailers are experimenting with drones, including Amazon, which first announced its tests back in 2016. In June, Amazon exec Jeff Wilkes announced it would be ready to begin shipping packages “within a matter of months.” The service, for Prime members, can fly up to 15 miles, toting packages of up to five pounds, which means it can handle between 75% to 90% of all Amazon deliveries.

For now, Walgreen says the test is limited to about 100 products, and six “packs”: allergy, baby, cough/cold, first aid, pain and kids’ snacks.

Prescription deliveries are not available. The company says the service is ideal for people who don’t want to leave the house, either because they have a sick child or are sick themselves, and don’t want to spread germs in a drugstore.

Walgreens says it selected Christianburg because of its proximity to Virginia Tech, near Blacksburg, which has been participating in the U.S. Department of Transportation’s Integration Pilot Program since 2016. And while the test is happening in this one small market, the company points out that 78% percent of the U.S. population now live within five miles of store owned by Walgreens. (It also owns Duane Reade and RiteAid.)