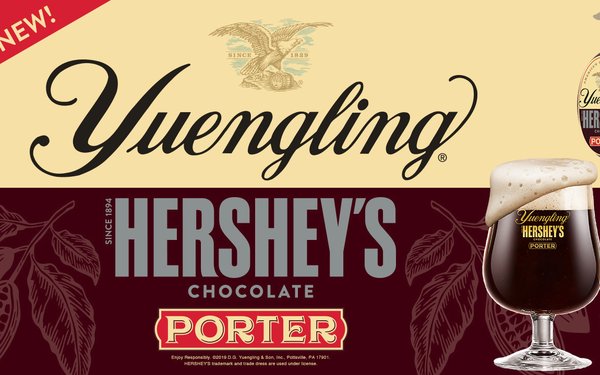 Why didn’t this happen sooner?

D.G.. Yuengling & Son, based in bucolic Pottsville, Pennsylvania, will team up with the Hershey Co., located less than 50 miles away in rustic Hershey, to produce a Chocolate Porter draft beer launching in mid-October.

It will show up in some bars and restaurants in Washington, D.C. and 11 states, mostly in the East.

After this initial launch, Yuengling hopes the brew is big enough hit to put in bottles and cans and distribute more widely,  Jennifer Yuengling, vice president of operations and a sixth-generation family member, tells Marketing Daily.

For now, the only advertising of the new brew will be on paid social media, according to Jessica Seiders, Yuengling' communications manager.

The two companies have long histories. Yuengling claims to be the nation’s oldest brewery, founded in 1829, more than four decades before Budweiser. Its porter beer family recipe is at least as old as the brewery.

The Hershey Co. started in 1894, a year after founder Milton Hershey returned from the 1893 World's Columbian Exposition in Chicago, where he purchased his first piece of chocolate-making machinery. It’s the nation’s largest chocolate company.

The collaboration, “seems like a long time coming” says Yuengling. In fact a year ago, the Yuengling 1829 Pavilion opened at Hershey Park, the amusement park operated by the candy company that had never served alcohol before.

But there is no particular eureka moment that led to the new Chocolate Porter.

“It seemed like a good time to do this, Hershey celebrating 125 years and Yuengling celebrating our 190th anniversary,” she says. “America loves beer and America loves chocolate, and we’ve discovered some great food pairings with this beer.”

It’s Yuengling’s first-time coupling with another brand on a product. It produces an Oktoberfest beer and other seasonal beers -- but when it introduced its Golden Pilsener in 2018, it was the company's first new year-round product in 17 years. Mainly, it sticks with its tried-and-true lager and black-and-tan.

To some beer drinkers, Yuengling is as ubiquitous as a Budweiser. It is widely available on the East Coast and somewhat beyond -- in 22 states officially -- but it's still classified as a craft beer because it produces fewer than 6 million barrels a year, the relatively new cut-off point set by the Brewers Association.

“We joke around here that it took us 190 years to get into 22 states, so don’t rush things,” Yuengling says.

For the last four years, the company has had the distinction of being the largest small brewer in the nation, she says. "We fit in comfortably in the domestic, premium and craft beer categories.”