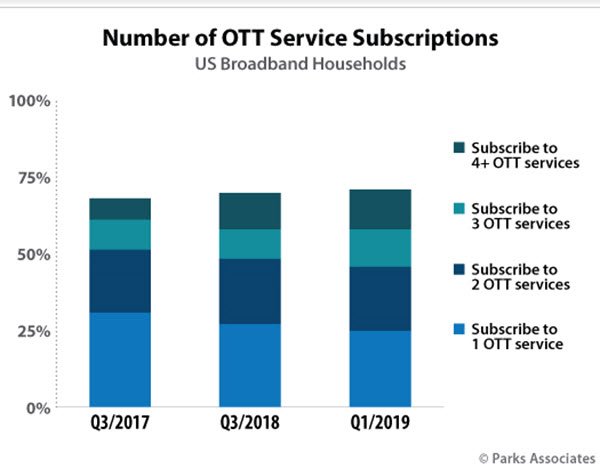 Nearly half (46%) of U.S. broadband households now subscribe to two or more over-the-top services, according to a video services trend report from Parks Associates.

Also, 53% of U.S. broadband households now subscribe to at least one OTT service and a pay-TV service; and nearly three quarters subscribe to an OTT video service (up from 52% in 2014).

“Most OTT households are anchored by one of the three major services — Netflix, Hulu, or Amazon Prime Video — but consumers are finding they can’t fulfill all their interests through a single service. Many small and medium-sized services are building their brand and subscriber base by filling in these gaps in content.”

However, about 90 of the growing number of services now available in the U.S. have fewer than 50,000 subscribers, and 72 have fewer than 20,000, according to the report.

“While overall adoption and awareness of OTT video services as a category are high, awareness of any specific individual service is low, which will make it difficult for smaller services to match the scale, revenues, and marketing efforts of larger players,” points out the report.

Nearly three in 10 OTT services in the U.S. are on Amazon’s Prime Video Channels aggregation platform, up more than four times versus two years ago.

“Netflix can afford to license high-value content like ‘Seinfeld’ to supplement its original content, and Apple can buy commercial space during the Emmys and NFL games to promote its upcoming Apple TV+ service and its array of content and stars,” adds Nason.  But smaller OTT services “are having to harness the power of a partnership with an aggregator, bundling or content partner, or marketing and promotion partner to boost awareness of their brand and offerings.”

Parks Associates conducts quarterly online surveys with global online sampling/digital first-party data collection/marketing insights company Dynata (rebranded from Research Now after its January merger with SSI). Dynata’s survey panel is recruited via email, using rewards points or other incentives (see its site for more panel methodology specifics). Parks sets demographic quotas for its surveys (updated each year based on broadband user data from the U.S. Census Bureau and Pew) to ensure its sample reflects U.S. heads of household ages 18+ who have at-home broadband internet. At least 10,000 U.S. broadband households are surveyed each quarter, for a margin of error that does not exceed +/- 0.98%.