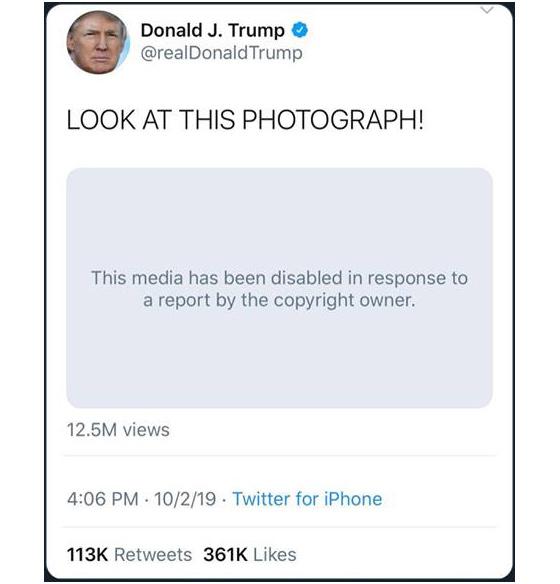 In the original video, lead singer Chad Kroeger holds up a photo of himself and the group's producer, and sings “Look at this photograph. Every time I do it makes me laugh.”

The edited version posted by Trump shows Kroeger singing the same lyrics, but while displaying a photo of current presidential hopeful Joe Biden, his son Hunter, and the Ukranian company Burisma Holdings -- which was recently under investigation for corruption.

By Thursday morning, Warner Music Group sent Twitter a notice demanding that the platform remove the clip on the grounds that it infringes copyright.

Twitter complied with the music label and took down the clip -- a move that prevents Twitter from being sued for copyright infringement. That's because the Digital Millennium Copyright Act provides that platforms like Twitter aren't responsible when users posted infringing material, but only if the platforms remove the material upon request of the copyright holder.

Had Twitter had refused to take down the video, the company would have left itself vulnerable to a lawsuit by Warner. Of course, Warner may have decided against suing. Or even if it had, Twitter may well have prevailed on fair use grounds. But as of Thursday morning, the company's legal department obviously wasn't willing to take that risk.

The Digital Millennium Copyright Act sets out a procedure for uploaders like Trump to object and ask for content to be restored. It's not yet clear whether Trump plans to do so.

Regardless of the fate of the Nickelback clip, politicians have clashed with copyright holders over ads before, and are bound to do so again before the next election is over.

As far back as 2008, the presidential campaign of Sen. John McCain asked YouTube to rethink its approach when a content holder claims a political ad infringes copyright. The campaign wanted YouTube to review the material and make a decision about fair use before removing clips.

YouTube turned down that request, stating that determining whether clips make fair use of material is too complicated for the company to do until it has heard from content owners.

More recently, in April Twitter removed a post by Trump that included music from the 2012 Batman movie “The Dark Knight Rises,” after Warner Bros complained.