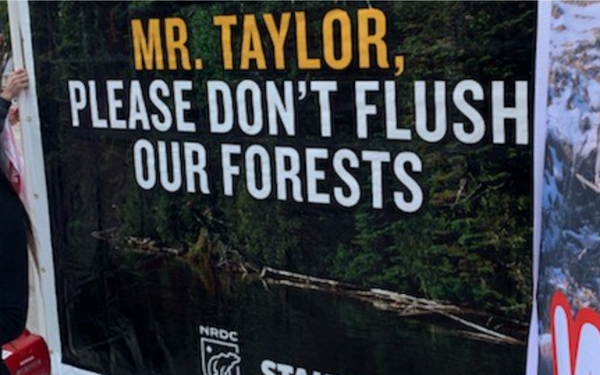 In an earlier report, the NRDC gave Charmin “a failing grade for using zero recycled content while instead relying on ancient trees clear-cut from the Canadian boreal forest.” That forest is sometimes called the “Amazon of the North.”

“In the face of the worst environmental crisis our planet has ever faced, there is simply no excuse for P&G to continue flushing our forests down the toilet with its unsustainable business practices,” said Shelley Vinyard, boreal corporate campaign manager for NRDC, in a statement.

She told Marketing Daily that the group had been meeting with P&G for over a year, with “two simple asks”: that P&G stop felling trees in critical caribou habitat in the boreal, and reduce its reliance on using virgin forests to supply paper for Charmin and also Puffs and Bounty.

“It’s interesting. After the meeting, some shareholders came up [to me], surprised that something so small -- you use toilet paper for just a few seconds -- could make such a big difference,” Vinyard said.

The protest was arranged by NRDC and Stand.earth, another nonprofit environmental advocacy group, but a letter it carried to Procter & Gamble CEO David Taylor was signed by 115 environmental, conservation, consumer and student groups in the U.S. and Canada.
.
Protesters greeted shareholders going into the facility holding the annual meeting by handing out “Who Gives A Crap” toilet paper the organizations said was made from “100  percent recycled paper.” A bear meant to depict the bear on Charmin’s packaging strolled around outside carrying a chainsaw.

P&G seems to be proud of its environmental record. Last year it said its 2020 environmental goals had been largely met ahead of time so it set it new ones, in its “Ambition 2030” document.

One part of that statement said P&G endeavors to “reduce our footprint, protect the forests, and improve the livelihoods of palm smallholders.” (P&G uses palm oil in a wide variety of its products. Most of those growers are in Malaysia.)

P&G already has a sustainability program for manufacturers who supply Charmin, some of which is outlined in Go Beyond: Charmin’s Sustainability Promise. It is a member of two certification programs that attest its paper comes from responsibly managed forests. It says it plants “at least one” tree for each one it uses. It has reformulated Charmin so that is four times stronger than it once was, so theoretically, less needs to be used. It’s also involved with a variety of conservation and reforesting programs.

But NRDC’s Vinyard said P&G’s sustainability program “doesn’t have the teeth to really make a difference.”

P&G and other consumer packaged goods companies have amped up their sustainability and environmental activities as consumers, particularly younger ones, look for signs of genuine commitment to conservation and fighting climate change.

Environmental action does seem to be making a difference to the bottom line. Unilever said last year its sustainable brands grew 46% faster than the rest in its portfolio and delivered 70% of its revenue.