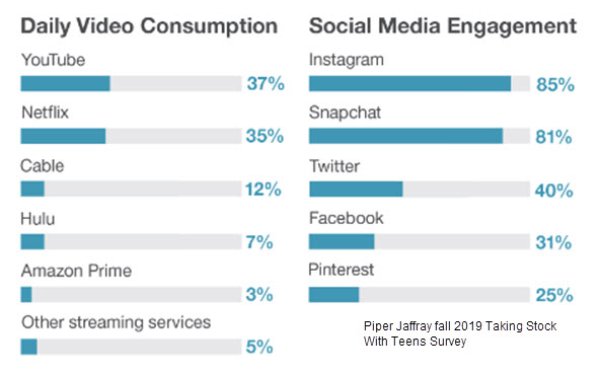 On average, teens reported spending 37% of their daily video consumption on YouTube, compared to 35% for Netflix.

This marks the first time Netflix hasn’t come out on top in average self-reported view time since the investment bank started its semiannual surveys of teens in 2001.

However, it’s important to note that many teens use both services and/or other services, and Piper Jaffray did not supply a margin of error for the survey.

YouTube’s appeal is its robust library, which includes teen-oriented content including music and influencer videos, video game playthroughs, and how-to videos, according to the analysts.

Netflix and YouTube both remain far ahead of cable TV — which is now the most-used video platform of 12% of those surveyed, down from 14% in the spring 2019 survey.

Hulu and Amazon Prime Video are the most-viewed platforms of just 7% and 3%, respectively, and 5% report spending most of their viewing time on various other streaming services.

Regarding the coming competition from Disney+ and others, these analysts say they believe that the market will support multiple players, with Netflix still in the lead.

Instagram and Snapchat are teens’ favorites in the social media sector, commanding 85% and 81% of their social time, on average. Instagram was No. 1 for the third survey in a row.

These teens’ top social media influencer is David Dobrik, and their favorite celebrity is Kevin Hart.

Amazon is their favorite ecommerce site, cited by 52%. The next most popular sites are far behind: Nike was cited by 4%, American Eagle by 3%, and Urban Outfitters and eBay by 2% each.

Fully 83% of these respondents report having an iPhone, up from 82% a year ago.

Commenting on this finding, MusicAlly.com notes that recent figures from tech firm DeviceAtlas “suggested that overall (for all ages) iOS has a 59.5% share of the U.S. smartphone market, with Android on 40.4%. If Piper Jaffray’s figures represent a true picture of U.S. teens (including those from less-wealthy backgrounds) that’s… interesting, especially for the future prospects of Apple Music.” According to Piper Jaffray, this survey’s respondents had an average household income of $65,400.

Looking at the broader results, 32% of teens surveyed said they believe the economy is worsening, versus 25% indicating the same in the Fall 2018 survey.

That may account for a self-reported decline in spending — down 4% versus the fall 2018 survey and down 10% versus the spring 2019 survey, to the lowest spending level since Fall 2011.

Each spring and fall since 2001, Piper Jaffray has been surveying 9,500 teens, with an average age of 15.8, from “a geographically diverse subset of high schools across the U.S.” This fall’s survey participants, from 42 states, were 54% male, 45% female and 2% non-binary.