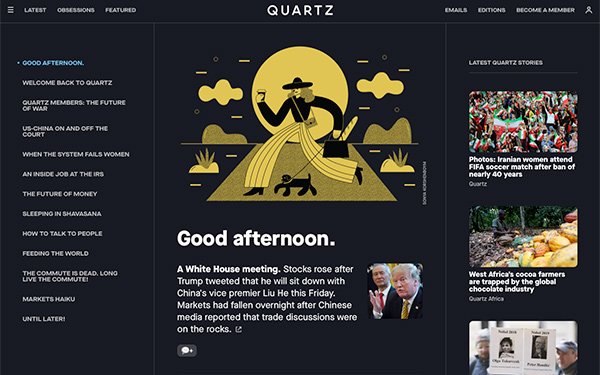 Quartz has redesigned its homepage and iOS app, signaling the first of many changes to come for the business news outlet under its new ownership and leadership.

The biggest new feature of the redesign: “a continually updated briefing of the day’s most interesting and important business news, selected and summarized by our journalists around the world,” according to a note to readers from new CEO Zach Seward.

The new design is intended to feel more personal. Users can go into light and dark modes. Iillustrations at the top of the page now refer to the reader’s time of day.

The updated briefing on the Quartz homepage features contributions from its journalists, members and Quartz Pros, a community of high-profile leaders from different industries that provide insights on the news of the day.

“We’re excited to feature their contributions front-and-center in the briefing and throughout the rest of Quartz. Only members can leave contributions, and we review them all, featuring those that enhance our coverage with new information or insights,” Seward wrote. Previously, Quartz Pros were featured on the Quartz mobile app.

Going forward, Quartz will invest “in new member-exclusive offerings, increased engagement among members and Quartz journalists and further experimentation with new formats,” according to the company.

Quartz plans to launch new homepage and app editions for the UK, India and Japan this year. (Nearly half of its readers live outside the U.S.)

This will include tailored news feeds, emails, local Quartz Pros and member-exclusive benefits.

A new app for Android will debut next month.

It launched a membership program last November, and set up a metered paywall in May.