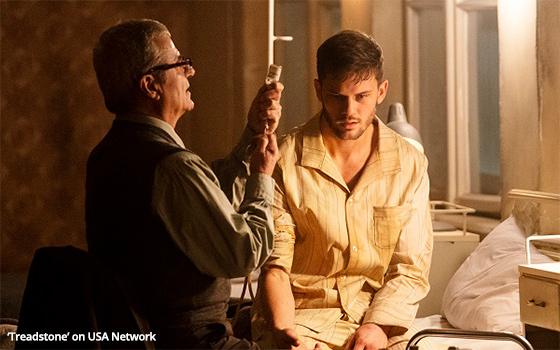 This is no small feat, because the Bourne movies occupy a class all their own in the pantheon of action movies released over the past decade or so.

They are relentless thrillers characterized by close-up and often-fatal hand-to-hand combat in tiny spaces, and breakneck car and motorcycle chases through the world’s most crowded and crooked alleyways and urban streets.

They are literally heart-pounding. They have a can’t-believe-your-eyes quality that has you constantly wondering how on Earth they made these sequences in the first place.

If “Treadstone” does not quite match up to the movies’ nonstop action, then that’s OK. There is just enough action and suspense in “Treadstone” to qualify it as one of the best new TV series to come along all year.

For those unfamiliar with the Bourne series, “Treadstone” refers to a top-secret U.S. government Cold War era program, known only to a select few in the covert intelligence apparatus, in which extreme psychological means were used to turn ordinary Americans into robotic, ruthless and very effective killers.

Jason Bourne was one, and the movies had the character on a quest to discover his own former identity and reconstruct his past.

The Bourne character is not a part of the “Treadstone” series, but the show has been genetically spawned from the Bourne universe, which was created by the late thriller author Robert Ludlum (1927-2001) in three Bourne novels.

Premiering this week, “Treadstone” introduces us to a whole new set of characters, some from the now-distant past and others who are now newly active in the present day. In the premiere episode, and in subsequent episodes, the action moves backward and forward, from 1973 to the present and across the world -- from CIA headquarters in Langley, Virginia to East Berlin, Russia and North Korea.

Whether or not the locations used in “Treadstone” are authentically located in these cities or countries, these locations very persuasively look and feel like the real thing.

This show serves as a great reminder of the importance of location scouting when producing scripted dramas for television, which is, after all, a visual medium. Where “Treadstone” is concerned, the locations are among the most attractive reasons for watching it.

Like the Bourne movie series, “Treadstone” lives or dies on the quality of its action scenes. Like the movies, “Treadstone” tells the story of a group of highly fine-tuned warriors who, among other things, are trained to continue fighting relentlessly through whatever pain and injuries they might experience.

This must present a whole host of challenges to whomever is assigned the task of choreographing and filming these kinds of “staged combat” fight scenes. The fights in “Treadstone” are wholly convincing.

As with so many TV shows today, “Treadstone” is not necessarily recommended for the faint of heart. The injuries meted out in the show’s many fight sequences are literally bone-breaking. For some, this show might be a little bit too crunchy.