Lincoln Invites Influencers To Get Some Sleep 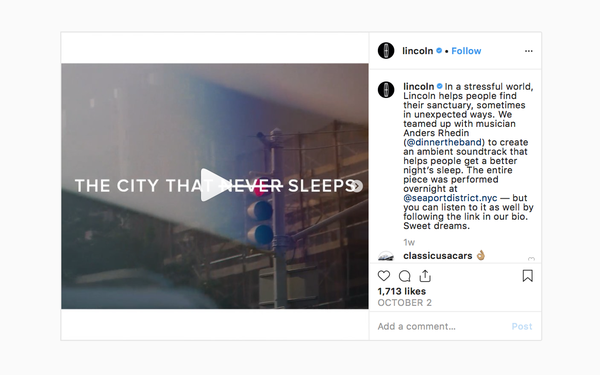 Lincoln Motor Co. invited a group of influencers to take part in a "Glamping Under the Stars" experience at Pier 17 at the Seaport in New York City

Through its products and services, Ford Motor Co.'s luxury division aims to provide a rejuvenating experience for its clients, and the activation incorporated that idea.

Ten influencers and their guests were invited by Lincoln’s agency, Hudson Rouge, which curated the experience. They listened to "The City That Sleeps," an ambient soundtrack created and performed by Anders Rhedin.

Rhedin traveled to eight different New York City neighborhoods to gather sounds usually perceived as noisy and distracting in the city that never sleeps. He then turned those sounds into calming tracks.

Lincoln and Captured Tracks are releasing “The City that Sleeps” via a streaming platforms so that consumers can have the same relaxing experience.

The influencers were part of Lincoln’s month-long Summerhouse program and were chosen strategically to correspond with Lincoln’s passion points of design, traveling like a local, and wellness. They participated in several experiences throughout the month, and "Glamping" was the main and final event.

“On our mission to reach people where they spend time, we have to consider the role that social plays in their lives,”  Hudson Rouge Chief Creative Officer Jon Pearce tells Marketing Daily. “Their feeds are full of influencers whom they follow, admire and trust. So it makes total sense for Lincoln to show up in that world in an authentic and relevant way.”

Social-only campaigns tend to reach a younger target, Pearce says, adding that Lincoln is likely to continue to use influencers in its marketing.

“But broadcast television is still an important part of our media spend,” Pearce says. “Between live events and live sports, we still find a lot of affluent customers are tuning in. And as long as we find influencers who maintain a certain aesthetic and point of view that we feel reaches our target customer, we’re going to continue to seriously consider using them.”

automotive, influencer marketing
1 comment about "Lincoln Invites Influencers To Get Some Sleep".
Check to receive email when comments are posted.
Next story loading