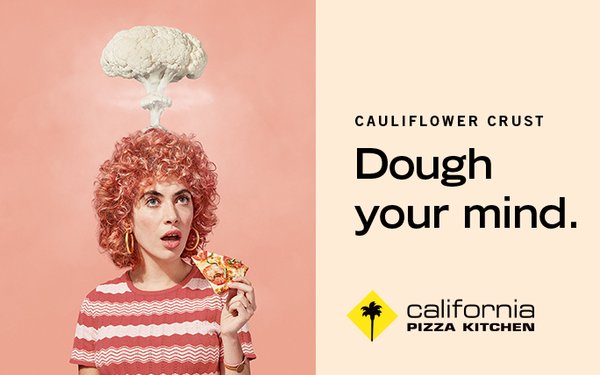 Creative for the campaign, which also includes digital and radio, consists mostly of brief vignettes in which people bite into a slice of cauliflower-crusted pizza and a stalk of the vegetable explodes above their heads — similar to an erupting volcano.

“This was a stylistic choice using a Phantom camera, which can shoot at a very high frame rate,” Dave Schiff, founder and chief creative officer at Made, the agency behind the creative, tells Marketing Daily.

Saying it was the first national restaurant to offer a gluten-free pizza crust, CPK launched a cauliflower version nationwide in January of 2018 following a limited preview in select southern California locations in late 2017.

“Cauliflower Crust has been a success for us since we introduced it nationwide, and continues to perform,” said CPK global chief marketing officer Scott Hargrove. “With this campaign, we wanted to shine a light on a product our guests love, with work that looks very different from what you’d typically find in the category.”

The three-month campaign is being supported by digital media consisting of display, social and YouTube.

CPK has also responded to consumer demand for vegetable-centric meal options by introducing such non-pizza offerings as battered and fried spicy buffalo cauliflower and shrimp scampi fettuccine with zucchini ribbons.

CPK opened its first restaurant in 1985 in Beverly Hills and has since expanded to more than 240 locations in 10 countries and U.S. territories. It has closed some locations along the way, including its only restaurant in Manhattan earlier this year due to rising rent costs, along with one in a mall in downtown Stamford, Connecticut.