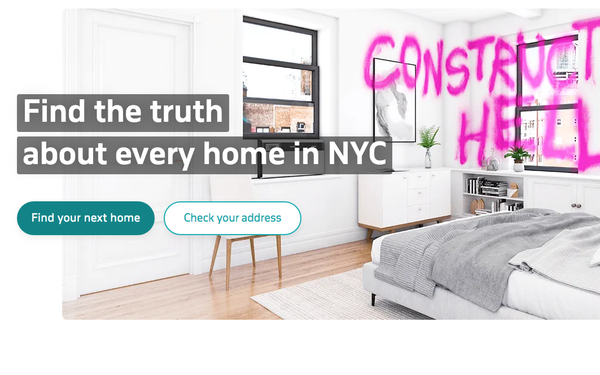 "I spent over a decade in the ad business between R/GA and Twitter; I also had the opportunity to be a juror at Cannes," he explains. He understood his platform needed to differentiate from other home search platforms that simply show ads for apartments by grabbing the audience's attention.

The creative, developed with agency Interesting Development, is designed to call out deceptive real estate listings by contrasting the typical look of an extremely attractive listing with what looks like graffiti across the photo.

Each image is diminished by statements about undesirable home attributes like bed bugs, constantly out-of-order elevators and nearby construction projects. Although these aren't real listings, the ads direct viewers to find real-time openings via the tagline, "Find the Truth. Find a Home. Localize.city."

"I’ve seldom seen a campaign that manages to grab the audience’s attention for two very shocking reasons: One, telling the truth, when the truth is so upsetting, and two, delivering a bold message from an industry (real estate) not known for being trustworthy," says Kalifowitz.

The Israeli-based company uses artificial intelligence to incorporate billions of data points into an insight engine that reveals both good and bad points about rentals. In addition to Kalifowitz, other members of the team have experience leading algorithm and software development at recommendation platform Taboola and Trusteer (acquired by IBM for $700 million) as well as leading map design for Waze (acquired by Google for $1 billion).

The OOH campaign debuts in New York City across subway platforms and on trains, taxi toppers, buses and phone booths, all in highly foot-trafficked areas. The company will expand to four additional cities by the end of the year.