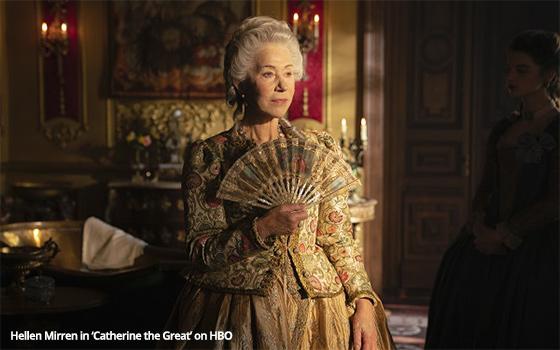 Who among us today can truly be called “Great”?

The question arises with the arrival on Monday night of “Catherine the Great,” a new, four-part miniseries on HBO about the notorious Russian tsarina who ruled from 1762 to 1796.

There may be others, but everyone can agree there are very few. Catherine may, in fact, be the last of them, indicating that affixing “the Great” onto the names of historical figures has fallen out of fashion. Most of us would agree that Donald the Great just doesn't have the same ring to it.

As an honorific, “The Great” would seem to imply a degree of majesty on the part of its designees. Perhaps, Helen Mirren might henceforth be known as Helen the Great.

She stars in the title role of this “Catherine the Great” miniseries and plays the part seamlessly, as if she has known all along how an empress should comport herself. Maybe this sense of evident self-confidence came from her previous portrayal of Queen Elizabeth II in “The Queen,” for which she won an Oscar.

HBO's “Catherine” has everything we have come to expect from this sort of made-for-HBO production -- sumptuous sets, glittering costumes and exotic locations. Indeed, much of this miniseries seems to have been filmed in the very palaces in which Catherine herself may have lived and conducted her queenly business.

There is also considerable sex in this miniseries -- which is another hallmark of HBO. In this miniseries, it is all intended to paint a lusty picture of the Russian aristocracy -- including Mirren's Catherine, who is no less lusty than her courtiers.

The primary object of her lust is Grigory Potemkin, noble and military officer, who is played in the miniseries by Jason Clarke.

In the miniseries, Catherine is challenged to outwit members of her court and her inner circle who are intriguing behind the scenes to undermine or depose her. A cursory look at the years of her long reign -- 34 years -- reveals that in the end, Catherine got the best of everyone.

Knowing this in advance will do nothing to prevent anyone from enjoying this “Catherine the Great” miniseries. It is one of the best new attractions to come along on TV all year. Like Mirren herself, who gives one of the year's best performances, the miniseries earns the right to be called “great.”