'Thrillist's Best (and the Rest)' Podcast Launches Via iHeartMedia Partnership 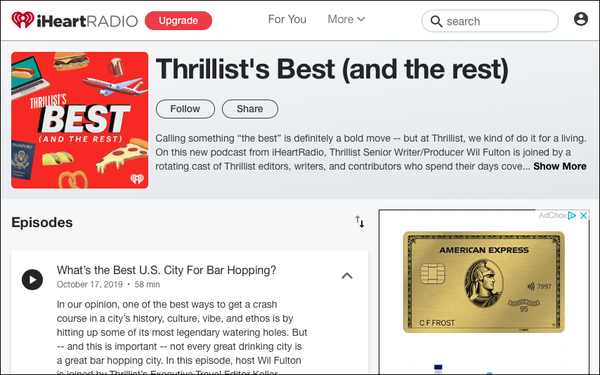 has released its inaugural podcast called “Thrillist’s Best (and the Rest)” in partnership with podcast publisher iHeartMedia.

The show is the first new podcast from Group Nine Media to appear on the iHeartMedia network following an exclusive deal earlier this year and officially launches their coproduced podcast slate.

Episode one explores “What’s the Best U.S. City for Bar Hopping?”  Its now on the iHeartRadio app and wherever podcasts are available. The show appears every Thursday and features 20 episodes, each 35-45 minutes long, in its first season’s run.

“Our first podcast gives Thrillist fans the inside scoop on how our editors determined how those infamous lists get made,” Thrillist’s Chief Content Officer Meghan Kirsch stated.

“Thrillist’s editorial bread and butter is curating lists of the best of the best. From the best fast-food chains on the West Coast to the top shows you should be watching right now, Thrillist editors are known for giving our audience the rundown of how they should be spending their free time,”  she added.

“Thrillist’s Best (and the Rest)” is hosted by Thrillist senior writer-producer Wil Fulton, who is joined by writers and editors each week.

Each week’s theme is guided by Thrillist’s focus on food, drink, travel and entertainment, with shows touching on the best things to order at Taco Bell, the best craft beers and the best cure for a hangover.

The podcast’s launch comes just a day after Thrillisttapped Munchies& amp; nbsp;founder Helen Hollyman as its EIC. Hollyman is the brand’s first EIC since it became part of Group Nine Media in 2016.