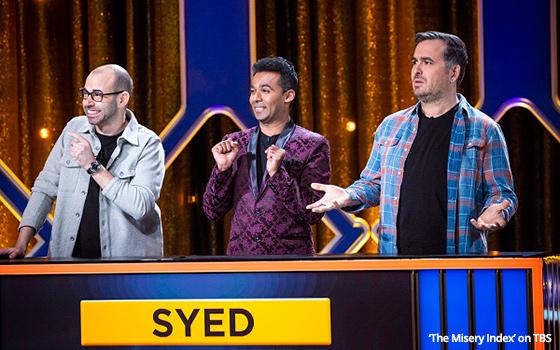 The TruTV foursome known as the Impractical Jokers are taking up residence on a new, additional show on co-owned TBS, possibly because the TruTV schedule has run out of room to contain them.

The four are panelists-in-residence on a new game show called “The Misery Index,” premiering Tuesday night on TBS. It is a game in which contestants can “make a fortune from other people's misfortune,” according to an introduction delivered in the premiere episode by host Jameela Jamil.

The show's “Index” is a self-styled (and difficult-to-explain) system under which an unseen panel of experts, said to be composed of mental health professionals, “score” various sticky (and icky) situations involving real people, based on the physical pain they experienced, their emotional trauma and the perceived impact on their lives.

Contestants are then challenged to guess where these incidents’ misery indices will fall in relation to other situations with similar consequences. Supposedly helping each contestant in making these assessments are the Jokers of TruTV's “Impractical Jokers” -- Brian Quinn (“Q”), James Murray (“Murr”), Joe Gatto and Sal Vulcano (“Q” and “Murr” are shown with a contestant in the photo above).

If the show's premise sounds complicated, that is because it is complicated -- in this case, uselessly complicated since the show has little or no value as entertainment or anything else.

In fact, portions of the premiere are as unwatchable as TV gets, including one “situation” in which a woman on a foreign TV show gets her hand accidentally impaled on a large nail. It should go without saying, but TV, by its very nature, should be watchable, not unwatchable. And yet, here we are again.

Perhaps one way to consider “The Misery Index” is to try and determine what the index would read for those who run the Turner networks (now WarnerMedia) if the four Impractical Jokers suddenly decided to up and quit.

This would produce a misery index that would likely go off the charts because without “Impractical Jokers,” TruTV would lose 34% -- just north of one-third -- of its entire daytime and prime-time schedule.

As anyone knows who just happens to casually come across TruTV while grazing through the cable channels at any time of day, “Impractical Jokers” is the dominant feature of this network. If it seems as if this show is “always” on, then that is because it almost always is on.

Specifically, if this week is typical (Sunday, Oct. 20, through this coming Saturday, Oct. 26), then “Impractical Jokers” and its repurposed spinoff, “Impractical Jokers: Inside Jokes,” will account for 57 hours (comprising 114 half-hour episodes) of the available 168 hours on TruTV during these seven days, according to TruTV's schedule.

This represents a boon presumably for those who cannot get enough of the antics of these Impractical Jokers who play pranks on innocent passersby at locations primarily in New York City such as public parks, mall food courts and fake offices.

The bits they produce are among the funniest and most creative to be seen anywhere on TV today. As an example of authentic, edge-of-your-seat comedy, “Impractical Jokers” happens to be a great show.

However, “The Misery Index” amounts to a misuse of the four Jokers. It plays as a contrivance, so common throughout television history, in which a TV company realizes it has a good thing, and then endeavors to squeeze it dry.

In contriving an ending to this review, it is irresistible to write something along the lines of: As a TV viewing experience, “The Misery Index” rates high on its own index.