In Post-Apocalyptic 'Daybreak' On Netflix: Teens Are Sole Survivors 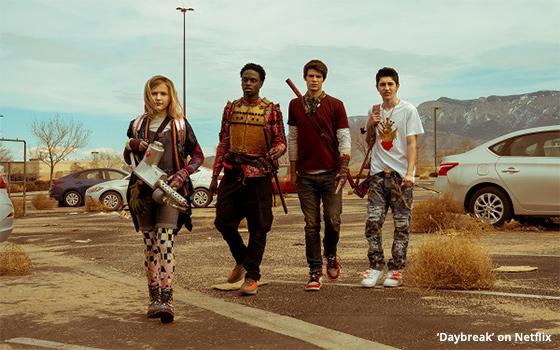 All over the TV business, network programming executives are probably asking themselves and each other: Why can't we make more shows like the ones on Netflix?

It is a logical question to ask because of the way Netflix seems to have taken over television -- or more generally, that amorphous thing called “the Netflix model.” This model might seem easy to define, but it is not so easy to explain.

Is Netflix a success because time and time again, the shows it launches are a cut (or several cuts) above the shows seen elsewhere across the TV spectrum?

This question has no clear answer. Whether they are or are not better than the average TV show is really a matter of personal opinion.

So if it is not the shows per se, is it the delivery system Netflix has devised, combined with easy-to-digest prices, relative ease of use, a great deal of variety encompassing both original and licensed content, and last (but definitely not least) the way the Netflix system encourages binge-watching by starting the next episode in 5-4-3-2-1 seconds before you have time to decide not to?

The answer is probably much -- if not all -- of the above.

This throat-clearing start to this TV Blog is a way of getting into a review of a new Netflix series called “Daybreak” premiering Thursday.

The show, consisting (so far) of 10 episodes, is alternately a comedy or a drama about the end of the world. Located in the Los Angeles suburb of Glendale, “Daybreak” takes place in the aftermath of an unspecified conflagration from which only teens emerged unscathed. By contrast, the grown-ups who survived emerged as zombies the teens call ghoulies.

Thus, the show itself emerges as part “Last Man on Earth” (the comedy part) and part “Lord of the Flies” (the drama part in which various teen factions from the local high school form themselves into post-apocalyptic warring tribes). Throw in a little “Mad Max” and “Dawn of the Dead” (the original George Romero masterpiece about zombies in a mall) and that’s the show.

Clearly aimed at teens and very young adults, it is not a bad show. They will probably enjoy its incessant narration (by the main character, a high school boy named Josh played by Colin Ford), the tension it depicts between disparate groups such as nerds and jocks, and its whole teen-centric point of view in which the consequences of a worldwide cataclysm are measured solely on the basis of how this might adversely affect these teens’ lives. Never mind the implication that millions of people have apparently been killed.

But the point is that this show could have been made and aired by any number of TV networks (Freeform, CW and a few others) -- which is to say, the only real difference between this show and other TV series for young audiences is that this one is on Netflix.

And as such, it achieves an aura that is not possible on the less-trendy television networks with their commercial breaks and conspicuous lack of binge-watching countdown clocks.

These features -- no commercials and an almost too-easy facility for encouraging hours of binge-watching -- are what set Netflix apart, even if pound for pound, much of the original content on Netflix is no better or worse than TV shows seen elsewhere today.

As for “Daybreak,” the premiere episode ends with a cliffhanger -- just before the countdown clock starts ticking its way to Episode Two. Just try and look away. It simply is not possible.