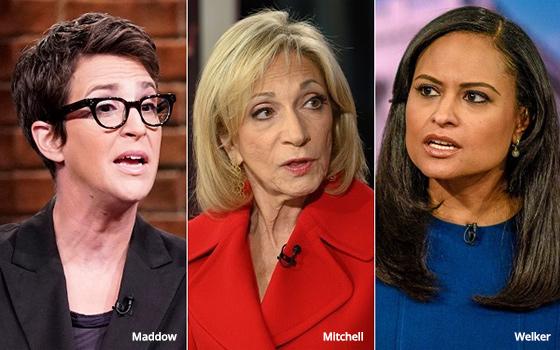 Men in our society -- or at least in our media currently -- are beginning to look like Tom Hagen in “The Godfather.”

“You're out, Tom,” Michael Corleone informed him matter-of-factly at a family meeting. The reason: “You’re not a wartime consigliere.” And that was that.

OK, maybe it is not quite the same thing, but no men will be among the moderators at the next Democratic Debate scheduled for Nov. 20 in Atlanta, and airing live on MSNBC.

“You're out, men,” is one interpretation that emerged in the trade press after NBC News announced this week that the four moderators would all be women -- from NBC News, Rachel Maddow, Andrea Mitchell and Kristen Welker (pictured above), and from The Washington Post, NBC’s partner in this debate, Ashley Parker (not pictured).

A trade press report took the point of view that NBC assembled this all-female panel of moderators to counteract the pummeling that NBC News has been taking in the wake of Ronan Farrow's book “Catch and Kill: Lies, Spies, and a Conspiracy to Protect Predators.”

“The announcement of a team of four women to moderate next month's event comes as NBC News has been facing criticism over the way that it handled the firing of Matt Lauer in 2017,” said Deadline.com in an effort to create a linkage between the all-woman panel announcement and the Lauer backlash, though there is no evidence of such a connection.

Deadline’s angle on the story could be interpreted as implying that the only reason these four women are moderating this debate is so that NBC News can be seen as bending over backwards to accommodate and promote its female news stars.

But the truth is, every one of these women has earned a spot on this panel through their own hard work and achievement in a tough, competitive business. Perhaps they were the best choices, male or female, to moderate this debate.

The problem is that today, everyone is a cynic who believes every action is subject to some nefarious, unseen interpretation. But sometimes, things are just exactly as they are. In this case, four women have been set up to moderate the next Democratic Debate. Anybody got a problem with that?