Sometimes, Network News Is Not Too Keen On Covering Itself 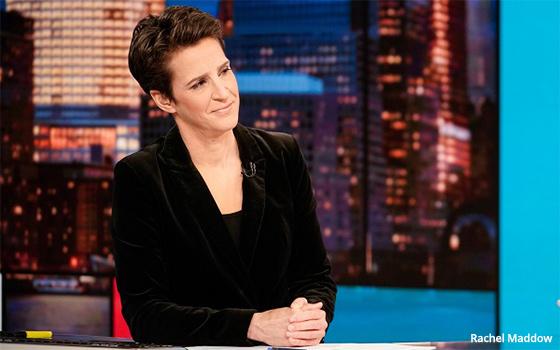 Rachel Maddow seems dismayed to find out that her employer, NBC News, is not too keen on going all-in on covering Ronan Farrow's book and its accusations that NBC brass was aware of Matt Lauer's behavior long before it became public and did nothing about it.

But this is a lesson I learned years ago early in my own career: Network news divisions are just subdivisions of large corporations whose management more often than not would rather their own news departments avoid or give short shrift to stories about their own companies.

When I was young and naïve, I used to wonder why the networks’ news divisions were as hard to crack for information and access to management as the entertainment divisions.

By their nature, the news departments should have been open to inquiries and interviews about their internal workings because, I reasoned naïvely, this is what their own journalists expected everyone else to do when they came calling for information and interviews.

But alas, I came to find out that the news divisions were as closed-mouthed and uncooperative as just about every other entity that I, or any journalist on any beat, would encounter in the course of carrying out our responsibilities.

There are exceptions, however. In August 2018, CBS News' own coverage of the fall of Les Moonves, chairman of the division's parent company, was exemplary.

And even NBC News candidly announced at the top of the “Today” show on Nov. 29, 2017, that it had dismissed Matt Lauer just moments earlier. On the other hand, how could they not?

Here in the present day (last week, to be exact), Farrow made his first appearance on any NBC News show -- on Maddow's nightly talk show on MSNBC -- to be interviewed about his book “Catch and Kill: Lies, Spies, and a Conspiracy to Protect Predators.”

According to numerous reports about the book, among its revelations is that in 2017, NBC News passed on Farrow's own reporting on the Harvey Weinstein story, after which Farrow quit NBC and wrote an investigative piece for The New Yorker that won him a Pulitzer Prize.

Ever since the release of Farrow's book two weeks ago on Oct. 15, management and rank-and-file staff at NBC News have been roiled in two ways.

Management has circled its wagons, issuing statements that appeared to question the quality of Farrow's reporting and even suggesting that he had an axe to grind since NBC cancelled his short-lived afternoon talk show on MSNBC in 2015 due to low ratings.

Rank-and-file staff, meanwhile, are said to be disappointed in how their own company is dealing with these stories. This is according to Maddow herself.

"The allegations about the behavior of Harvey Weinstein and Matt Lauer are gut-wrenching at baseline, no matter who you are or what your connection is to this story,” Maddow said on the Farrow show last week. “But accusations that people in positions of authority in this building may have been complicit in some way of shielding those guys from accountability -- those accusations are very, very hard to stomach.

“The amount of consternation this has caused among the rank-and-file people who work here would be almost impossible for me to overstate,” Maddow said.

No doubt, the whole situation is making for much conversation among the cubicles and down the corridors in the NBC News offices at 30 Rock.

Bravo to Rachel Maddow for taking on her own company. If not her, then who?