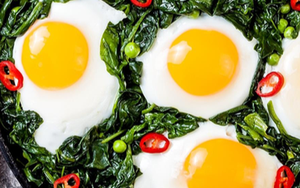 In 2016, breakfast versions of non-breakfast foods — everything from burritos to lasagna to pizza — plus various Mexican dishes were key drivers of restaurant breakfast menus, based on consumer tastes.

When the company surveyed more than 300 restaurant operators representing 667,000 chain and independent restaurants, it found more than one-third of operators had seen an increase in breakfast sales over the past year.

Meanwhile, in a concurrent survey of a nationally balanced sample of 1,100 adults ages 18+, Datassential found that made-to-order food, having a wide variety of offerings and the ability to customize dishes are top attributes consumers consider when deciding where to have breakfast.

Millennials in particular are highly adventurous and tend to have a greater interest in on-trend breakfast foods like premium toast or Asian breakfast dishes. This helps explain why avocado toast is now the fastest-growing breakfast item at both limited-service and full-service restaurants.

On the operator side, 36% indicated they are interested in offering next-generation breakfast bowls, and 56% now offer a brunch menu that differs from their breakfast offerings — up from 51% three years ago.

Approximately one in four had increased brunch sales in the past year, with one-third having extended brunch to mid-afternoon, and 25% beginning to serve brunch in the early morning.

Just over one-third (36%) of restaurant operators said they would raise breakfast prices in the next year for a variety of reasons, according to Datassential senior project manager Jackie Rodriguez.

“Breakfast has been one of the few growth areas in the industry, so it’s not surprising that restaurants would want to take advantage of consumer demand for the morning meal,” Rodriguez tells Marketing Daily. “Breakfast also typically has lower price points than other dayparts, so consumers aren’t as likely to feel as hard a pinch as with dinner.”

The consumer survey shows that even as such national QSR chains as Wendy’s are about to join many others in the breakfast race, 60% of respondents indicated they eat breakfast at home because of costs. But their in-home choices have been straying from stalwarts like cereal.

Wellness and cultural trends have been changing morning eating, according to research from Hartman Group. “While many consumers have traded their old favorites for healthier versions (whole grain toast, granola, oatmeal), a wider variety of foods, often sourced from an increasing number of channels, is now meeting morning needs,” the company reports.

This has not served cereal marketers well, as indicated by recent financial results at Kellogg Co. and General Mills. North America cereal sales at Kellogg dropped by 4.8% in its recently ended third quarter as it continued to rationalize its package mix. General Mills managed to produce a 1% U.S. sales gain in cereals in the first quarter of its fiscal year 2020.