Executives of the top corporations in America have grown more cognizant of the online profiles of themselves and others, and they actively research those of colleagues and industry thought leaders, according to findings of an annual study reported exclusively by Research Intelligencer.

The findings, which are the first benchmark of the role digital platforms play in shaping the perceptions of others, cannot be compared to previous years, but Qnary founder and chairman Bant Breen says it signals an anecdotal shift from Google’s dominance to LinkedIn’s.

“I would say that when we first began researching this in 2017, it really stood out that Google was highlighted heavily as the discovery platform among executives,” he tells MediaPost, adding that the role social channels play in shaping executive reputations is in flux, but LinkedIn likely excels for several reasons, including the adoption of its mobile app.

Breen, who is a long-time Madison Avenue executive, who previously was a digital wunderkind at Interpublic, says the new data isn’t explicitly representative of the sentiment of ad executives, but they likely are among the most reputation-savvy of all types of corporate executives given what they do for a living. 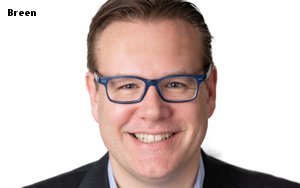