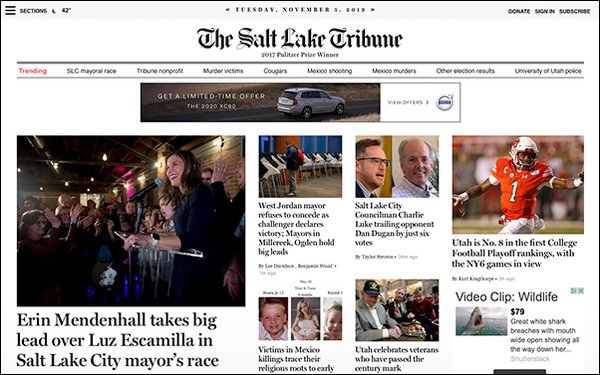 The Salt Lake Tribune is the first daily legacy newspaper in the U.S. to become a nonprofit organization. The IRS approved the change, deeming the Tribune a 501(c)(3) public charity.

While the Tampa Bay Times and The Philadelphia Inquirer are owned by nonprofits, they operate as for-profit publishers. The Salt Lake Tribune claims it is the first legacy newspaper making the full switch to nonprofit status.

Salt Lake Tribune owner Paul Huntsman is giving up ownership, and the paper will now be run by a board of directors. Huntsman will serve as chairman.

“The current business model for local newspapers is broken and beyond repair,” Huntsman told The Salt Lake Tribune. “We needed to find a way to sustain this vital community institution well beyond my ownership. Nonprofit status will help us do that. This is truly excellent news for all Utah residents and for local news organizations across the country.”

The Huntsman family bought the Tribune in 2016.

Editor Jennifer Napier-Pearce told Canham she hopes to expand the publisher’s offerings with support from readers and partnerships with nonprofits going forward.

Revenue will now come from a mix of donations, advertising, subscriptions and a separate foundation.

The Utah Journalism Foundation is also creating an endowment to fund independent journalism in Utah. The Tribune will be a big beneficiary, according to Canham.

The newspaper will continue to cover politics, the arts, religion, environment, sports, opinion and more, but will be required by law to cease endorsing political candidates going forward.